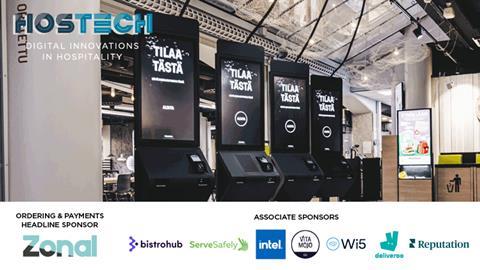 Mobile order and payments may be becoming more prevalent in the casual dining sector, but those in the QSR space, such as the fast food giants, have been turning to self-service kiosks and drive-thrus to improve and heighten the customer experience, and have since been joined by other smaller groups, including Leon.

Leon began working with Vita Mojo in January 2020 trialling kiosks in its restaurants and they are now the primary in-store sales channel for a number of its sites, which now process 85-95% of all orders digitally. Not only have customers taken to using them, as has been found when using mobile payments, they tend to spend more when using them, with Leon reporting an increase of 10-15% in average transaction value compared to traditional POS transactions thanks to upsells and basket recommendations.

Pyramid Computer, the German-based company that supplies kiosks to a number of fast food brands, says that some of its customers are even seeing a 60% rise in average customer spend compared to using a cashier.

Pyramid’s kiosks are powered by Intel Core processors, which Intel says enables them to do more than just take customer orders and payments.

“Intel is involved in many restaurant operations,” say Farhaan Mohideen, product strategy and IOT spokesperson at Intel. “Wherever you see kitchen screens, menu boards, kiosk and drive-thus our technology is there.”

The company creates references to show its end partners which they can then use to go and build an end-to-end solution.

“Companies will look at how we’ve used technology to solve certain problems so that’s where Intel is important.

“We are showing them some of the accelerators we’ve used and some of the hardware and software in order to create the solution – we look at devices like POS, signage and kiosks. We are creating an ecosystem that solves real business problems, getting the solution and bringing them to market.”

One such innovation is touchless kiosks. With concerns over the hygiene of touch screen kiosks in QSR restaurants, with staff having to be on hand to clean them after every use during the pandemic, Intel is working with kiosk provider Acrelec to bring a touchless one to the market.

It is looking at installing depth cameras in the kiosks that sense when someone is making hand movements, meaning that dishes can be chosen by customers simply hovering their hand over a selection rather than pressing a screen.

Intel is also working on similar technology for drive-thrus, where cameras can identify the number of cars waiting in a queue and try and regulate them automatically.

“If you can make sure the queue is no longer than three cars it will make it easier for a customer to make a decision to join it,” says Mohideen.

By systems being integrated and talking to each other, queue data can be transferred to kitchen management systems to instruct servers the volume of items needed to prepare in order to make sure the cars move quickly.

Such integration is where ordering and payment technology really comes into its own. In sushi restaurant chain YO!’s case, not only is its ordering technology linked to its Monk conveyor belts, the company also switched to Vita Mojo’s EPOS and kitchen display screen which moved it to become a single view operation that aggregates all direct orders, as well as those from delivery platforms such Deliveroo, for accurate and timely fulfilment.

Zonal, meanwhile, partners with more than 100 strategic technology providers and Crave and Wi5 also say their platforms are designed for easy frictionless integration with multiple third parties, the latter naming businesses including Zonal. Designed for speed and simplicity, customers can pay instantly and securely with Visa, Mastercard, ApplePay and GooglePay.

Integration, and having systems that can talk to each other and share data, is at the heart of what technology company Intel is working on. Only by having different technology communicate with each other through the internet of things (IOT) can restaurants really harness the advances that technology can offer.

“In the past, if we deployed something in a restaurant everything would have its own silicone, such as POS and digital signage,” says Intel’s Mohideen.

“There were also siloed environments, and somebody would have to go and build a whole data lay to gather all that information. Now there could be multiple devices that are sitting in the store or outside and everything is generating data.”

Mohideen says technology such as silicone and edge computing has played a massive role in increasing security and speeding up connectivity so that data can be shared quickly between systems.

“Intel helps with anything where you want to make decisions immediately. In the past if somebody was creating a data lay they would have to take all of this information, make sense of it and then send it back, but that’s too late for anybody to react. Because of that we have edge computing within the environments, and it delivers all these drivers – which means you only send information that is aggregated.”

Proper integration allows for two-way communication with the customer and enables technology to be much more intuitive and responsive to specific situations. This is an area of the market that is evolving quickly and has the potential to dramatically improve service, particularly in more casual venues.

“For example, if the kitchen is slow our system could automatically offer a free drink to the customer. This is of real benefit as it means operators don’t need to rely on staff to remember to do this.”

Register your details on our dedicated Hostech website to receive a weekly roundup of content, including our free tech guides.

Sign-up for our two free webinars, must-attend events for those tasked with driving efficiencies and encouraging loyalty in a tough trading climate. 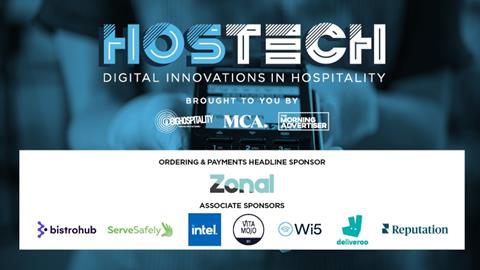 Self-service kiosks - following the lead of fast food
Mobile order and payments may be becoming more prevalent in the casual dining sector, but those in the QSR space have been turning to self-service kiosks and drive-thrus to improve efficiencies and heighten the customer experience. McDonald’s has led the way in self-service kiosks, but has since been joined by others. Leon’s kiosks are now the primary in-store sales channel for a number of its sites, which now process 85-95% of all orders digitally. Not only have customers taken to using them, they spend more, Leon reporting an increase of 10-15% in average transaction value compared to traditional POS transactions thanks to upsells and basket recommendations.