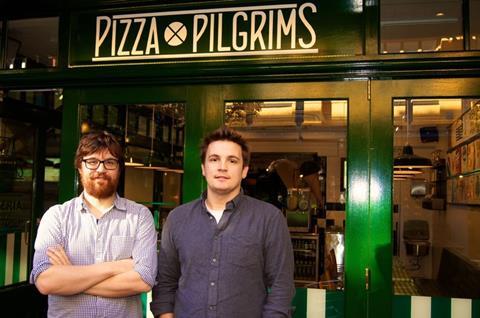 Having reopened its London City site on Tuesday (15 September), the brand’s entire 13-strong estate is now back up and running, but the reopening of dine-in is just one of many positive steps the business has been able to take in the past six months.

One of the first to the lockdown home-kit market, Pizza Pilgrims set about diversifying its delivery strategy almost immediately in March with its Pizza in the Post initiative.

Since then, the initially reactive revenue stream has gone national, has become a permanent feature of the brand’s offer, and as co-founder Thom Elliot tells MCA, is now set to go from strength to strength.

“The product is still doing really well,” he says. “It’s slowed down a bit since lockdown, but it’s still trading as well as a good, solid Pizza Pilgrims site every week.”

Alongside the obvious financial benefit, the kits have also had a sizable impact on brand growth, doubling Pizza Pilgrims’ Instagram following and reaching consumers outside its London-centric physical market.

“There are people buying the kits in bulk in Edinburgh and Cornwall who probably didn’t even know Pizza Pilgrims existed before,” Elliot says. “And there’s been people like Stormzy and Phillip Schofield making kits. It’s been completely mad.”

Because of their continuing popularity, the business has invested in an all-new production facility in Herne Hill, intended to operate as both a residential delivery hub for Deliveroo and dedicated preparation space for Pizza in the Post.

In separating the kits from the everyday running of the restaurants, Elliot hopes to develop and adapt the concept beyond its current two-pizza - Margarita and Nduja – offer.

“We’ve created a space to allow us to push that concept harder and do more exciting stuff,” he says. “We’re trying to branch out into new topping combinations, into vegan and gluten free, and expand what you can get in the kit.”

But despite its delivery-focused nature, an avenue Elliot explains Pilgrims is interested in exploring further, he is determined that this first dark kitchen – which is complete with a PlayStation room and sound system - will be “as light a kitchen as it can be”.

“The idea that a store can live with a more delivery-focus is an interesting one, but we still want it to be a living, breathing thing,” he says. “We don’t want it to be on an industrial estate next to a commercial tiling company.

“Ultimately, we’re a people business and the word ‘dark kitchen’ doesn’t do that any justice.”

As well as developing its new delivery offer, in the past few months the business has made some senior-staff changes, written a Pizza Pilgrims “love letter to pizza” book – which is due to be released on 12 November – and most significantly, acquired an all-new site in central London.

Located in Queensway, Elliot says they could start developing the site “tomorrow,” but have nevertheless decided to put it off until inner-city footfall improves.

“The money is there to do it, but we don’t think it’s the most prudent thing to do,” he says. “But if things keep going as they are then we will crack on with it.”

And despite the temptation to look to expand in the boroughs because of their comparatively higher footfall, for Elliot, to give up on the inner-city would be a long-term mistake.

“There’s a temptation to panic and think we need to open in every borough of London that we haven’t considered in the past because everyone’s staying there,” he says. “But whilst that’s true for now, it would just be panic masquerading as a strategy.

“I totally agree that the City won’t have the same number of people in it again for a long time, if ever, but I also feel like there will be a correction in how many restaurants are still open.

“As much as I don’t want to see anyone close, if 70% of people come back to the City by the end of next year, and only 70% of the restaurants are open, we’re just back to where we were.

Pizza Pilgrims co-founder Thom Elliot: ‘We still believe in central London’
Through a nationwide lockdown, complete drop-off in London footfall, and slow and ongoing recovery, Pizza Pilgrims, true to name, hasn’t stopped moving. Having reopened its London City site on Tuesday (15 September), the brand’s entire 13-strong estate is now back up and running, but the reopening of dine-in is just one of many positive steps the business has been able to take in the past six months. One of the first to the lockdown home-kit market, Pizza Pilgrims set about diversifying its delivery strategy almost immediately in March with its Pizza in the Post initiative.