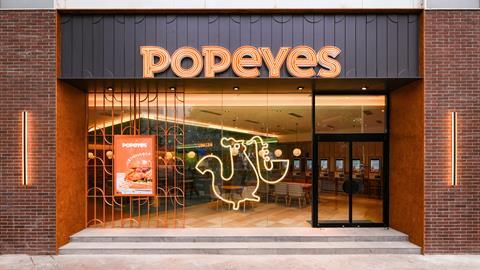 Take Popeyes’ plans with a pinch of Cajun

In the heady years of 2009-2018, stories of aggressive expansion plans were ten a penny.

So Popeyes’ announcement of its upcoming entry into the UK market was notable for its chutzpah.

The Louisiana brand is promising a 350-store rollout, under a name many UK consumers would more readily associate with a spinach-eating cartoon sailor than fried chicken.

Putting aside the lack of brand recognition for a moment, the claim begged the question of whether there was really space for another chicken brand to muscle in on the market.

MCA’s archive is littered with brands dazzled by the success of Nando’s, who’s promised three-figure rollouts came to little or nothing.

David Shear, of Popeyes owner Restaurant Brands International (RBI) alluded to the scale of the task, when he told MCA the UK was clearly a territory with “some competition”.

Most obviously this comes from KFC, also its larger rival in the US. Kentucky might represent the same competitor in a new arena, but RBI will be encouraged by KFC UK’s financial performance, where sales were down only 2% vs a total market decline of 48% during the pandemic.

Demonstrating the popularity of fried chicken at scale, RBI will also be keenly aware of the resilience of the branded quick service model during lockdown, through its franchised Burger King operations.

In terms of other competition, there is also the overlooked Chicken Cottage, and a myriad of generic independent chicken shops, which could represent challenges or opportunities, depending on the parent company’s perspective.

Branding-wise, Popeyes takes the eye-catching orange which has become the popular choice for chicken and buffalo wings in particular, while the burnt orange and turquoise interiors look more relaxing and premium than the garish diner style of other fast food chains. 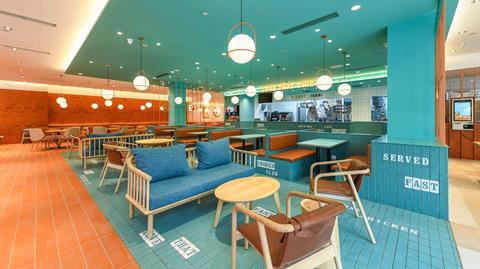 Founded in Louisiana in 1973, Popeyes has a punchier Cajun-style spice mix than KFC.

With around 2,500 US stores, it is the second biggest fried chicken brand in the States, to KFC’s more than 4,000, and the Middle America-focussed, soft-spiced Chick-fil-A’s 2,400.

Known for its popularity and presence in America’s black neighbourhoods, Popeyes has taken inspiration from and marketed itself to these communities, though its record on race is complex.

Yet the brand undoubtedly has plenty of admirers in the black community and beyond, its chicken sandwich launch causing a sensation in 2019, fans queuing round the block to buy the sell-out item. 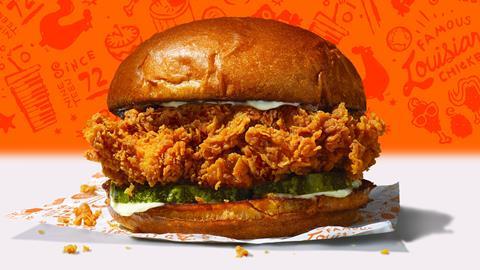 The power of the health lobby could also be a potential challenge, with Public Health England encouraging local authorities to limit the growth of fast-food outlets.

Still, judging by the popular demand for chicken in the UK, there may well be a viable opportunity for a well-landed offering, even if 350 sites does stretch credulity a little.

MCA once coined the dubious phrase ‘chickenisation’ to describe the dominance of poultry in the eating-out sector in 2014, when it made up 31% of protein on menus.

It has continued to grow steadily in popularity, albeit losing some ground to beef burgers, with fried the second most popular cooking method after grilled, according to data from Lumina Intelligence.

While Popeyes no doubt enters a competitive market, the current scene shows various offerings can exist within the poultry ecosystem.

At the premium end, a number of street food-originating concepts, including Thunderbird, Coqfigher and Butchies, show the category is not all cheap and cheerful.

The Philippines’ answer to KFC, Jollibee, has made a play of targeting the 200,000 Filipinos resident in the UK.

Boparan have demonstrated the potential in importing another relatively unknown US fried chicken brand, Slim Chickens.

And in burgers, let’s not overlook the example of Five Guys, an American quick service brand that has gone from zero to nearly 150 in the UK, since launching as a virtual unknown in 2013.

RBI also has its own record establishing the relatively unheard of Canadian coffee shop brand Tim Hortons in the UK, growing it to 25 sites since 2016, to a turnover of £14.5m in 2019.

Putting former Tim Hortons CEO at the helm of UK operations, the consortium clearly means business, even if the participation of an Austrian stationary conglomerate Ring International is rather curious.

It will target a variety of locations and formats, including town and city centre locations and out of town drive-thrus, where there is already stiff competition from fast food and coffee brands.

This broad approach would seem to be the only way of achieving 350 sites, but also gives RBI wiggle room to regear its strategy as trading conditions evolve.

Shear said Popeyes has already set a precedent for achieving that level of “aggressive” expansion in other international markets, including Canada where it has 300, and Turkey where it has more than 200.

No one ever got anywhere in business by being shy about scaling up, so the confidence of the brand is laudable, even if it might be best taken with a pinch of Cajun seasoning.

Editorial: Take Popeyes’ plans with a pinch of Cajun
In the heady years of 2009-2018, stories of aggressive expansion plans were ten a penny. This bullish attitude latterly gave way to a more cautious outlook, the pandemic putting paid to such big talk virtually altogether. So Popeyes’ announcement of its upcoming entry into the UK market was notable for its chutzpah. The Louisiana brand is promising a 350-store rollout, under a name many UK consumers would more readily associate with a spinach-eating cartoon sailor than fried chicken.