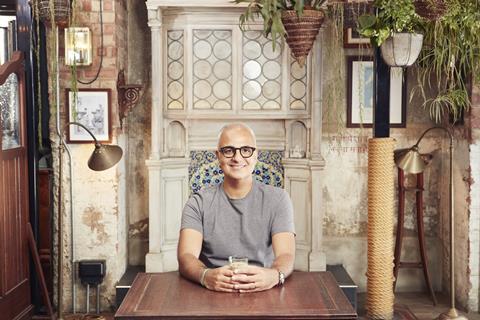 In usual times, an ‘if it ain’t broke, don’t fix it’ approach to operating a business as successful and celebrated as Dishoom makes sense.

But 2020 has been anything but usual, and despite its initial reluctance to drift from the carefully curated roll-out program that’s seen the Indian restaurant concept emerge as a well-established industry darling over the last ten years, in March the business announced it would be launching a collection and delivery option, for the very first time.

Though the initial delivery debut didn’t go exactly as planned – Dishoom reversed the decision after just four days because of distancing and safety concerns – the brand relaunched the service from its King’s Cross, Kensington and Shoreditch restaurants in May, and it has since gone from strength to strength.

With the reopening of the sector for dine-in in July, the group transferred its delivery operations to four dark kitchens across London, offering hot delivery via Deliveroo alongside an independent couriered home-kit proposition.

“We don’t want to move too rapidly and there will be limits to what we do,” he says. “But we’re certainly looking for further delivery opportunities.”

Thakrar doesn’t deny that the group’s decision to explore delivery was based on a “needs must” scenario, but given its integral role in providing cashflow and employment through dine-in closure, he is now determined to cultivate the offer with the same level of care the brand is known for applying to its restaurant sites.

“My previous view was quite ideological in that we shouldn’t do delivery because it just isn’t what we do,” he says. “But I think my initial delivery reluctance is helping us to push a bit harder and ensure it reaches a fantastic standard.

“We don’t want it to be a poor relation to the restaurants, we want to make it a brilliant part of the business.” 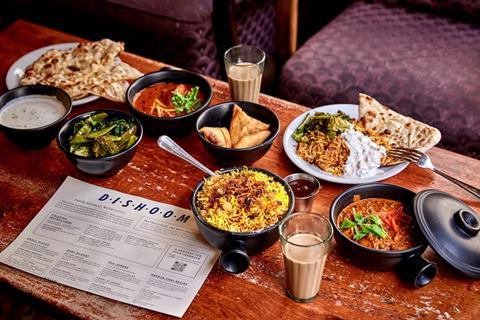 With quality and experience core components of Dishoom’s restaurant proposition, Thakrar says a priority in its delivery roll-out was for the offer to be consistent with, and complementary of, that which is available to dine-in customers.

“Dishoom is much more than the basics of the food,” he says. “And our initial reluctance came from the fact that we couldn’t express ourselves fully through delivery.

“We’ve worked really hard on curating the menu so it includes only the very best dishes that travel well. In some cases, we’re re-engineering recipes and designing dishes so they turn up to someone’s house brilliantly, and we’re even thinking of doing specials for events like Eid, Diwali and Christmas.”

As is tradition for each new Dishoom café opening, Thakrar reveals he is also working on an independent “story” for its delivery arm, and looking at how to elevate the narrative through packaging and communications.

“We’re very focused on it and we’re taking delivery very seriously,” he says. “We’re constantly thinking about packaging, the story of delivery, our dishes, and how we can make it all better.”

The short-term benefits of diversifying its offer during the pandemic are clear, but as is demonstrated in its Brighton delivery-only debut, Thakrar says the additional revenue stream has also provided the business with a low-risk strategy to explore future bricks and mortar growth plans.

“Ideally, we’d be opening new restaurants and we’d love to be doing that, but frankly at this time it’s too risky,” he says. “So, it’s not a bad thing to be able to reach guests further afield via delivery.

“We’ll think about a bricks and mortar site in Brighton, and delivery is a good way to test it out in this environment.

“The initial results have been good. People seem to like our food, and we’ll be putting our best foot forward and making it as good as we possibly can.”

In the meantime, Tharkrar has a more pressing opening to think about in the brand’s Covent Garden 10th anniversary relaunch.

In July last year, Dishoom announced the original Covent Garden restaurant was to undergo a “major redesign,” including a significant expansion of the site into the former Jamie’s Italian unit at 11 Upper St Martin’s Lane. 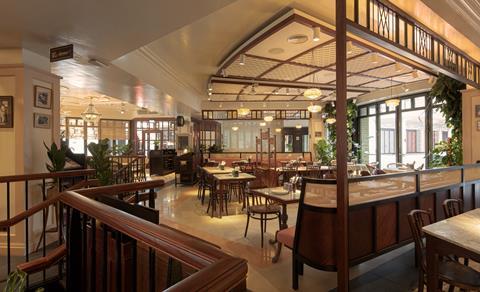 Initially set to relaunch in July, the first and second lockdowns forced the site to push back its reopening date twice, and it is finally able to initiate a soft launch this week, on Saturday 5 December.

Admitting he is “very nervous” about opening in the current market, Thakrar says the reimagined restaurant is “one of the best restaurants we’ve ever built,” and he remains hopeful the site’s experienced team will see it through a smooth and successful relaunch.

“I’m nervous because we’re relaunching a big site into Covent Garden that’s usually dependent on theatres, office workers and retail, none of which exists at the moment,” he says. “It’s tough and unpredictable at this point because we have a full team and a lot of café to fill.

“But our team are ready to get off on the front foot, so we’re just hoping that people will come along.”

With an all-new design and story following Bombay’s theatrical journey from Parsi theatre to the Talkies era, Thakrar says the restaurant represents “the perfect place to escape”, and in what has been such a distressing and uncertain time for the industry, working on it has helped him return to some of hospitality’s core principles.

“It’s lovely to be back in a restaurant, trying to design it and get people in,” he says. It’s reminded me of what we as restaurateurs do and why we love doing it.

“The concept involves lots of fun elements, and really gets us back to the root of what we do, which is serving people delicious food in beautiful environments.”

More importantly, the upcoming opening meant the business was able to retain all its staff, which Thakrar says has been “the biggest priority” for Dishoom throughout the crisis.

The business is financially secure until next June, at which point Thakrar says it should be able to trade its way through recovery.

And in light of fears the restaurants could be subject to additional quasi-lockdowns after Christmas, Thakrar explains it has formulated two business plans for the sites in coming months based on what “state” they might find themselves in – one for those able to operate, and one for those in lockdown.

“We’ve been extremely transparent with everyone in the business about how we’re doing, how the cash is doing, and the different implications of each state,” he says. “We’re secure cash-wise so we’ve been able to assure our staff that we’re not going anywhere, and the plan is to keep everyone in the boat.

“Cash is the blood of the business and that’s a pretty hard thing to make sure you’re happy with, but once you’ve done that you have to focus on your culture and your people.”

As is true of its commitment to concept and quality, Dishoom’s dedication to its people hasn’t faltered at the hands of the crisis.

In fact, Thakrar says that for all its financial challenges, the onset of the pandemic has only served to emphasis the crucial nature of the group’s staff culture, and pushed it to enhance its support for staff if and where it can.

“We’re helping the whole team with resources and training in handling finances or issues with landlords, and where people are experiencing specific financial hardships we’re intervening,” he says.

“We’ve made difficult decisions and had difficult discussions that were bias towards the team, rather than being financially led.

“We talk a lot about cultural values and supporting people, and this was a chance to show that they were real.”

Dishoom co-founder Shamil Thakrar: ‘Delivery won’t be dine-in’s poor relation’
In usual times, an ‘if it ain’t broke, don’t fix it’ approach to operating a business as successful and celebrated as Dishoom makes sense. But 2020 has been anything but usual, and despite its initial reluctance to drift from the carefully curated roll-out program that’s seen the Indian restaurant concept emerge as a well-established industry darling over the last ten years, in March the business announced it would be launching a collection and delivery option, for the very first time. It now boasts seven delivery-only kitchens, opening its latest in Brighton last week, and as co-founder Shamil Thakrar tells MCA, the business doesn’t intend to stop there.