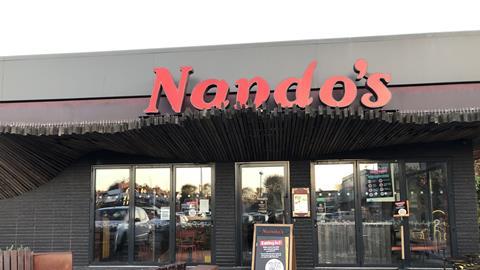 Does anyone remember a time before Nando’s?

Arriving on the UK fast-casual scene in 1992, the chicken chain has expanded from a single site in Ealing to nothing short of a national institution.

Today, with well over 400 restaurants across the country, you can’t walk five miles without spotting Barcelos cockerel, and the brand is so rooted in youth culture that a British celebrity without a Nando’s black card is barely a celebrity at all.

Just over 30 years since the business was founded in Johannesburg in 1987, consumers can now source their peri-peri fix in 35 countries across five different continents.

Home to a large proportion of its over 1,200 outlets, the UK branch comprises one of the brand’s largest markets, and it doesn’t look like that’s about to change anytime soon.

In the company’s last financial update in February last year, it reported an 8.4% rise in global revenue, surpassing £1bn, and attributed its significant growth to trade in ‘key markets’ such as the UK, where revenue rose 7.9% from £722m to £779.4m and pre-tax profits jumped 13% to £96m.

At the time, finance director James Fowler said the company would “continue to look for more sites to open at a similar rate to recent years” – it had opened 31 UK restaurants in 2018/19 alone – and the update said its global losses, which widened to £38.3m from £36.1m, were down to ongoing expansion investment. 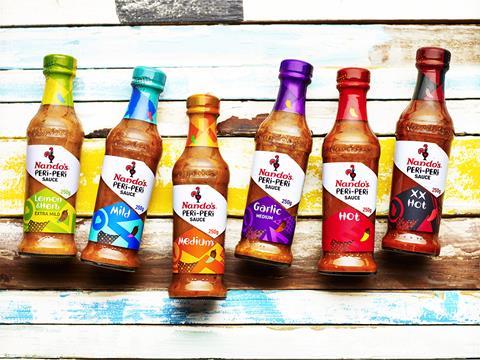 In November 2019, around the same time that Pizza Express was emerging as the latest casualty of the casual dining crunch, Nando’s backer and South African insurance tycoon Dick Enthoven announced a significant debt refinancing in the business.

Enthoven, who owns the UK business via a web of companies including Capricorn Ventures International and Yellowwoods, and also happens to be one of South Africa’s richest men, swapped a £128m loan for additional Nando’s shares, a move intended to free up the balance sheet for yet further expansion.

But with restaurants up and down the country, an expansive retail range in every major supermarket, a growing on-the-go Nino format (three London sites and counting) and even a market at 38,000 feet courtesy of airline Jet2, can the UK support this level of growth?

It would appear so. Consumers are besotted, voting the brand 2nd in YouGov’s 2019 Brand Index Buzz survey for the fast food and pubs category, and assigning it the highest overall score for food quality and taste (8.11 out of 10) in MCA’s 2019 Eating Out Panel tracker.

According to the Top of Mind Survey conducted by Lumina Intelligence for MCA, leading industry professionals ranked Nando’s the second ‘most admired brand’ for the last four consecutive years, narrowly losing out in 2019 to Wagamama.

Of course, all of this is pre-pandemic, but it seems Nando’s apparent immunity to the casual dining chaos of recent years has translated to this much bigger threat.

In line with the rest of the sector, Nando’s shut its entire estate on 22 March as the UK entered its first lockdown.

Through the course of the following few months, it initiated a small-scale reopening of seven sites to provide meals for the NHS, before expanding its relaunch to consumers via delivery and collection in a selection of restaurants over the course of the Spring. 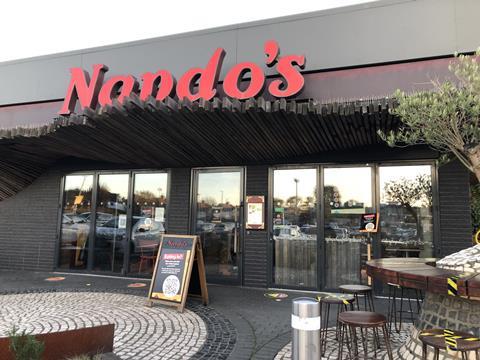 On 8 July, Nando’s reopened 10 restaurants for dine-in, announcing the launch of its new QR code technology, which would allow for a virtual queue and an entirely cashless consumer journey, and later initiated a large-scale reopening strategy across the estate.

Although the apparent lack of site permanent closures, job cuts or restructuring proposals is an achievement given the level of devastation the crisis has wreaked on the sector this year, with its strong financing and clear consumer loyalty, Nando’s survival isn’t surprising.

Also impressive is its commitment to driving forward improvements in its supply chain, despite the operational challenges posed by the global pandemic.

Immediately after lockdown, alongside the small task of remodelling its operations and reopening its restaurants, Nando’s announced sweeping changes to its supply chain, signing up to the Better Chicken Commitment to introduce new standards and increased sustainability by 2026, as well as to the Science Based Targets initiative, with an aim to achieve absolute zero direct emissions and reduce the carbon footprint of the average Nando’s meal by almost 50% by 2030.

It’s undeniable that all areas of society will come out the other side of this crisis changed in some way, and ever aware of the shifting attitudes in its core environmentally-conscious, increasingly meat-free and Attenborough-loving youth demographic, Nando’s isn’t about to be left behind.

Since then, it has launched a new food donation and employment programme, entered into an exclusive and first-of-its kind partnership with Deliveroo, which will see 360 of its restaurants join the platform with customers able to order via Deliveroo or through Nando’s own website under an integrated ‘brought to you by Deliveroo’ service, and launched its first plant-based chicken alternative in the UK – ‘The Great Imitator’.

In 2010, Guardian columnist Miranda Sawyer heralded the business as “one of a few modern restaurant brands to have changed the face of British fast food,” and if the last few years are anything to go by, it has and will continue to do so.

Four months in, you’d think I’d be able to scan a restaurant QR code with my eyes shut. Apparently not, and whether my eagerness to enter was driven by the miserable weather outside or the miserable thought that this would be my last peri-peri fix for a while, it came as a bit of a shock to the employee on the door.

After marching in it was kindly suggested that I march back out again, scan the (very large, very obvious) code and enter my details. Details in, my phone predicted a waiting time of five to ten minutes, but with the restaurant only half full I was seated straight away.

In a now familiar set-up for multi-channel operators, floor markers determined points of entry and distancing. With just one main door in this particular restaurant, markers directed eat-in customers to queue one side, and collection customers or delivery drivers to queue on the other. Upon entry, they are similarly pointed either into the restaurant, or to the tills-turned-collection point, complete with a heated cabinet and some Nando’s-esque perspex screens. 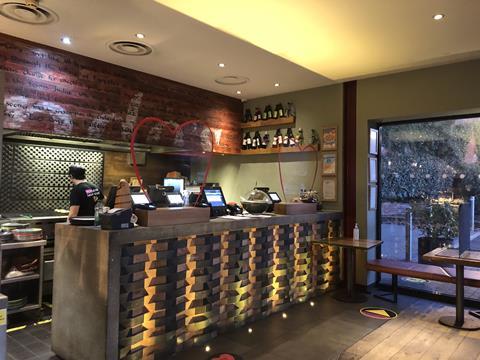 Unfortunately I drew the short straw and was seated at table one - which was positioned in between the door and a tall, black, translucent screen - but as far as the wider restaurant goes I was pleased to see the warm and welcoming familiarity true to each Nando’s interior hadn’t been lost.

Using a combination of screens, table coverings and seated wooden mannequins – strange but slightly better than the life-like kind – customers were generously spaced without forgoing the atmosphere.

Following my first QR mishap, my second interaction with the tech went much more smoothly. Once seated, an employee explained the new mobile order and pay system with the help of a clear instruction sheet placed on my table. 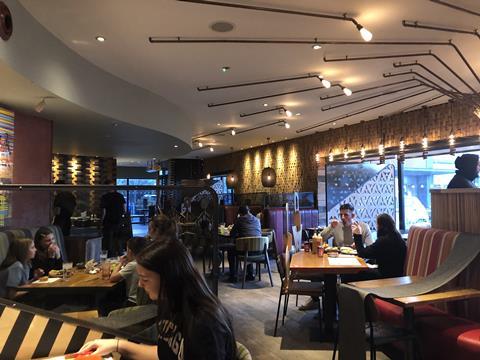 After scanning the table QR, signing into the Wifi and logging into my Nando’s account, which was slightly long-winded but doable, I was pleasantly surprised with the look and ease of the online menu. Bright colours, beautiful pictures, and so straightforward that if she knew what a smartphone was my grandmother would be able to do it.

Though I didn’t go for the new ‘Great Imitator’ plant-based option – this was, after all, my last Nando’s before lockdown – the brand made a strong effort in trying to persuade me to do so, advertising the new item on its safety instruction sheet and at the top of its online menu. 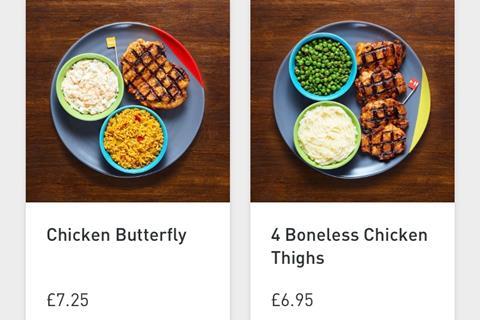 Of course, Nando’s isn’t the same, but for all its tech innovation and covid-secure protocols, it’s done a very good job of trying to remain so. The food itself was everything I wanted it to be. Hot, fresh and smothered in a generous amount of peri-salt and sauce. It arrived within six minutes, which has to be some sort of world record, and was followed shortly after by a plate of my requested additional sauces, condiments and cutlery.

Whether Boris thinks so or not, it’s clear that Nando’s is one of the many brands able to operate safely and successfully without compromising its core offer – good food, friendly staff, and a cosy, enjoyable dining experience.

And given the 15-person queue outside by the time I left the restaurant, I’m not the only person who thinks so.

Everything present and correct: Yes

Brandwatch: Nando’s
Does anyone remember a time before Nando’s? Arriving on the UK fast-casual scene in 1992, the chicken chain has expanded from a single site in Ealing to nothing short of a national institution. Today, with well over 400 restaurants across the country, you can’t walk five miles without spotting Barcelos cockerel, and the brand is so rooted in youth culture that a British celebrity without a Nando’s black card is barely a celebrity at all. Just over 30 years since the business was founded in Johannesburg in 1987, consumers can now source their peri-peri fix in 35 countries across five different continents. Home to a large proportion of its over 1,200 outlets, the UK branch comprises one of the brand’s largest markets, and it doesn’t look like that’s about to change anytime soon.