Paul: What it’s like to operate in a lockdown

Paul has opened up ten of its bakeries, around a third of its 37-strong estate. MCA spoke to Paul UK CEO Mark Hilton about the challenges and complexities of being open for business at a time like this. 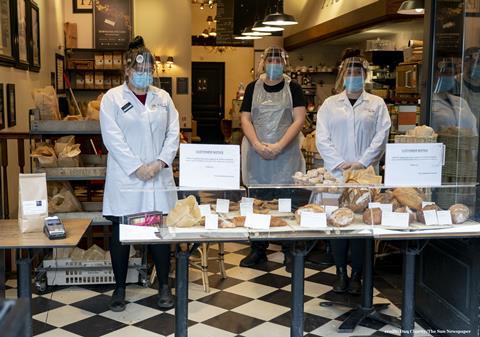 Hello Mark, what made you decide to start re-opening?

We re-opened because, fundamentally, we’ve been operating as a bakery for 130 years offering bread to the local community, and we felt we needed to try and maintain that heritage.

We’ve added to that by offering essentials like milk, and we’ve recently started adding flour and yeast, because there are shortages of that. We’re really trying to make the essentials available for people struggling to access supermarket delivery slots.

We are doing some patisserie, but we’re not doing cakes because we’re trying to be consistent with the government position of shopping for essentials, so it’s really the core products, rather than cakes. It feels like in this current situation you shouldn’t really be doing that.

We’ve also started working with Deliveroo, up until now we’d just been working with Uber Eats, now it’s both so that people can stay home and order products within the delivery zones of the stores we have opened.

How are you ensuring staff stay safe?

We originally closed because of the safety of our people. So when we reopened, that safety remained paramount, for our people and for our customers. We are only operating one shift per day between 8am and 2pm with a limited number of people working in the store, so they’re able to maintain social distancing. We’ve got about three or four people working in a store, normally we would have around ten.

How’s it working out in practice?

I think it’s pretty safe. One of the important things to mention is that everybody working is volunteering, they want to come to work. We’re not forcing anybody, and we’re only opening stores when we have enough staff to operate and there is enough consumer demand within the community. And we’re very strong on PPE, so everybody has aprons, gloves and face masks, but they also have an above the mouth mask, so it’s a complete plastic face mask (Note: The photo above was taken during the minutes silence on Tuesday, hence the solemnity).

We have to do the right thing for our people. As a brand, we are only as good as our people and our people are our best asset. If we do not make them feel safe, then we are not standing up to our code. My first priority is to make sure that our team is well looked after, my second has to be that our customers can come to Paul to buy our products in a safe environment.

Yes, it may not look particularly great because you’ve got PPE all over your face, but I would prefer my customers or my staff to feel safe over that detriment in terms of the look and feel. So I think you can overcome it if you provide great quality service, though I completely understand it’s a valid concern.

We just wanted to make sure that all of our staff have all the PPE they should have, in order to operate safely. And clearly we’re sanitising the stores, we have strict hygiene measures in place that we are adhering to, and the feedback that we’ve had from our people is they are really pleased to be coming back to work and they feel they feel safe.

One of the challenges that they have said is that one area where they feel less safe is on public transport coming to work, compared to once they are at work, so what we try to do is ensure that we have people living in the local vicinity working in our store. So people are working in stores today that they don’t normally work in, but we’re trying to make sure that people don’t have to travel long distances to get to work.

How’s it working out in terms of customers on the shop floor?

We’ve set it up so we have a table with sneeze guards over it in the entrance, so people aren’t actually coming into the store. So from a consumer perspective, it’s safe. They queue outside and then they can access our products and pay through a cashless system. We’d been talking about a cashless system before all of this happened, but we weren’t actually operating one, it’s a cashless process now. We are making it as safe as we can.

Are customers observing social distancing outside?

Yes, one of the reasons we initially only opened four stores, then another three, then another three today was our concern about people’s reactions, because obviously the government has asked people to stay in. And therefore, if you’re open people are coming out.

The customer feedback has been so appreciative. We’ve also been doing a lot of work support the NHS, we have schemes like free coffee for anyone that works in the NHS, we are part of feed the frontline.

And serving at the entrance means you avoid the upheaval of removing seating from inside and so on?

As we look at moving out of this phase of this pandemic, and try to get back some level of normality, we’re having to think very carefully about what that means for our stores and how we operate.

I’ll give you one example, our Covent Garden store has a restaurant at the back, so normally you can go in and get your products from the cashier at the front and if you want to then sit down you can then go through into the seating area at the back.

One of the questions we are asking ourselves when we re-open at that store is whether we open the restaurant or whether we just open the front. Because we have to understand whether we’re going to have to remove tables are we going to be able to run that in a financially viable way? That may not be possible.

So it may be that we can keep open the front of the store for the takeaway so that we are able to maintain social distancing so customers have confidence in coming into our stores.

What’s footfall been like so far? Has it been more popular than you expected, or do you sense that people are quite wary?

The first thing to say is that we’re losing money. If you look at all of the costs you would typically have operating a store, then look at the revenue that we’re getting at the moment, it’s not a profitable business. So it would be more financially viable if we were shut but I don’t think that’s the right thing for the band to do.

We clearly not opened all our stores, we couldn’t sustain that across all of our assets, so by ten we’ll be at just under a third of our stores which we can manage. We’re doing this because we think it’s the right thing to do, not only for the community, but from a brand perspective as well.

Having said all of that, we’ve been really pleased with the response. We’re clearly significantly below normal sales levels, but we’re seeing sales volume growing little by little each week. We see sales growing through delivery as well.

So we’re seeing encouraging signs, but we’re not naive. Even once things start to relax it’s not going to go back to normal. All of our planning shows a slow sales growth over the balance of this year. So we don’t see things going back to normal until probably 2021.

Do you have any advice for other operators hoping to start opening up again?

We believe that our people are our critical element, so I think as long as you open in a way that is fair to your people, and in a way that is fair to your customers, then you will be operating in the right way for your respective brands. For example, our people wanted masks around the mouth but also the full plastic face masks, so we are providing that equipment for our staff because like any other retail business, they are on the frontline.

Finally, do you have a date in mind to open any more stores?

We had an executive meeting yesterday to plan for when we should re-open the business. The current furlough position finishes at the end of June, so I think it’s logical for us to take a position based on current knowledge to re-open from 1 July when the furlough comes to an end.

If the government feel things are deteriorating because there’s too much interaction too quickly, and we’re going in the wrong direction again, obviously those dates might change. But at the moment our thinking is we will have the whole estate open for the beginning of July.

What’s it like to operate in a lockdown? Part One - Paul
French patisserie brand Paul has opened up ten of its sites, around a third of its 37-strong estate. MCA spoke to Paul UK CEO Mark Hilton about the challenges and complexities of being open for business at a time like this. “It may not look particularly great with PPE all over your face, but I would prefer my customers or my staff to feel safe,” he says.