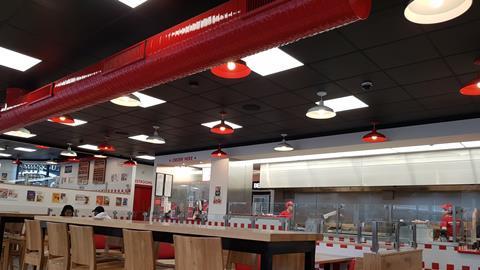 Long before the pandemic struck, Five Guys was one of the most aggressively expanding operators in the sector, snapping up prime real estate across the country.

Leaving rivals dizzy with wonder at the deep pockets of backer Sir Charles Dunstone, the mobile phone entrepreneur chose the American-founded fast food brand for his first big investment in food and beverage.

Sir Charles, who has an estimated fortune of £680m, manages most of his investments including Five Guys via Freston Ventures, a vehicle he co-founded with Roger Taylor, a long-term associate and a non-executive director of Talk Talk.

Dunstone’s other American-imported bet, MOD Pizza, recently fell by the wayside, a casualty of the coronavirus, though not a concept that was fully accepted by the UK dining public, despite its flagship site in Leicester Square, which no doubt commanded massive rents.

Five Guys on the other hand has been wholeheartedly embraced, winning over an aspirational cohort of celebrity and social media savvy millennials to become the go-to high street destination for premium fast food.

Since its launch in Covent Garden in 2013, the inimitable red and white burger brand has grown to 105 sites, its slick customer service and indulgent food also giving scope for expansion into Europe under the same joint venture.

Speaking at MCA’s Food to Go conference in February of this year, CEO John Eckbert promised the brand would pursue “even more aggressive growth” in 2020, with 14 units lined up in the UK.

While these ambitions may have been tempered by the pandemic, Five Guys has been one of the few businesses to emerge from lockdown relatively unscathed from the worst of its impact.

Having remained open for takeaway for the majority of lockdown, Eckbert told MCA’s The Conversation that reopening the estate for dine-in was a “fairly modest, incremental step”.

He said the pandemic had turned typical site expectations on their head, with Leicester Square 80% down, while new “hero stores” emerged, in places like Maidstone and Rushden lakes.

Another key tenet of the brand is its people, the company boasting a notoriously strong staff culture, and the only food and drink operator listed on The Sunday Times Top 25 Big Companies list in 2020, at number 21.

Already well known pre-covid for its enhanced hygiene, with staff wearing gloves, and daily store deep cleans, Eckbert said customers were greatly reassured by this when they reopened.

Despite the brand strength and people culture built up over the past six years, Eckbert acknowledges trading has been “really unpredictable and really different”.

Having been accustomed to 80% in store sales, Eckbert said “suddenly, you go to zero percent of in store sales”. As well as footfall dropping off, high profile flagship locations had no staff to operate the stores.

Having paid handsomely to beat rivals to these prime sites, this inevitably raises questions about how viable city centre venues are with so fewer customers.

Eckbert has said the existing rent model does not accommodate for a period of forced closure, so dealing with accrued rental debt comes down to a question of morals.

He describes rent as the biggest outstanding issue impeding the recovery of the sector, insisting operators and landlords must approach the stalemate from a “philosophical perspective” and opt for a shared sacrifice.

Despite this appeal, Eckbert said his experience dealing with landlords had tended to fall back on a “contract-based” position.

The insolvency of MOD shows there is a limit to Dunstone’s willingness to prop up a business that has struggled to gain traction in the UK.

But the strength and growth of Five Guys, and the money already invested, gives him good reason to double down on the concept, which has maintained strong customer engagement via takeaway and delivery.

The company made a loss of £4.7m overall, attributable to the owner, Five Guys Europe Holdings, which is ultimately controlled by Freston Ventures LLP.

In 2018 the group secured a £100m bank facility from Goldman Sachs to aid UK and European expansion and repay UK shareholder debt, reducing the blended cost of debt. All UK shareholder loans were set to be repaid in 2019.

According to Lumina Intelligence’s Operator Date Index, pre-coronavirus weekly average sales are around £35,500, putting them in the same league as McDonald’s.

Lumina reports both brands have considerably high sales for fast food operators without a focus on alcohol, although Five Guys does serve some beer.

Where it sets itself apart is in its brand values, which emphasise fresh and local produce, which aligns with consumer trends around provenance, craft and higher quality, Lumina reports.

Five Guys famously does not use freezers onsite, cutting and frying all potato chips and shaping every patty fresh on the day it is sold.

Another key draw is the customisable aspect, with customers famously able to choose between 250,000 garnish combinations.

Ahead of coronavirus, Five Guys had already revamped its app to make it as frictionless and with as few clicks as possible, another advantage in coronavirus times.

Self-ordering tablets and kiosks were being explored, but Eckbert said earlier in the year he was “not convinced” it was right for the brand.

The company also employs curbside pick-up, which allows customers to order by click and collect and have the food brought straight to their car using smart phone geo-location technology.

Blonnie Whist, head of insight at Lumina, says operators across the UK are ”having to adapt their operations at an incredibly fast pace. Guidelines are changing causing increasing uncertainty. Five Guys new curbside delivery is a great example of a nationwide operator finding innovative ways of keeping consumers and employees safe.”

Brighton city centre Five Guys is a more recent addition to the estate, its second in the seaside city after a Marina restaurant, and taking over the former Carluccio’s on 1 Jubilee Street.

Customers enter into a spacious lobby area, with a hand sanitizer and QR code for the NHS Covid-19 app dead ahead. There was no sanitizer left in the dispenser when I visited, and I was told by a server to use an alternative dispenser at the far end of the restaurant.

Before ordering, I was asked to sign in using the app, which I did. I saw other customers who did not have the app, but were given alternative methods of signing in.

The service was efficient and energetic, as Five Guys is well known for. One slight problem was the combination of face masks, Perspex screens at the till, and loud music in the restaurant made it more difficult than usual to communicate with the staff at the till.

Despite these ambient issues, and the numerous garnish options, ordering remains relatively straightforward, with a picture guide of toppings by the till, and a tight menu of options, which include a smaller burger option and a hot dog.

The food itself was fresh and tasty, as it consistently is. The brand has been criticised for having an eye-wateringly high volume of calories compared to its peers, and while no doubt generous in fat and salt, it seems unlikely any customer would go to Five Guys for a health kick. Particularly when adding in their creamy milk shakes, this is undoubtedly intended as treat occasion food. The portions appear to be of the super-size American variety, with even a small portion of fries looking equivalent to a large from another retailer, but again it’s unlikely customers would complain about this.

With delivery a near constant for Five Guys throughout lockdown, it was interesting to see the logistics of this in Brighton. Delivery collection and takeaway all go out of a separate door to the main entrance, and there was a minor disagreement with a Deliveroo driver, who was told he had to wait outside, rather than loiter in the restaurant.

Drivers come in, notify staff they have arrived, and then wait outside for the food to be brought out. This makes for a much more orderly situation within the venue, particularly for dine-in customers. On a moderately quiet Friday afternoon, the organisation of Five Guys delivery compared favourably to the more chaotic scenes of McDonald’s, where customers and Deliveroo drivers vie for a much smaller space.

How many tills open: one

Everything present and correct: Yes

Brandwatch: Five Guys
Long before the pandemic struck, Five Guys was one of the most aggressively expanding operators in the sector, snapping up prime real estate across the country. Leaving rivals dizzy with envy at the deep pockets of backer Sir Charles Dunstone, the mobile phone entrepreneur with an estimated fortune of £680 who chose the American founded fast food brand for his first big investment in hospitality. The brand has been fully embraced, winning over an aspirational cohort of celebrity and social media savvy millennials, becoming the go-to high street destination for premium fast food.