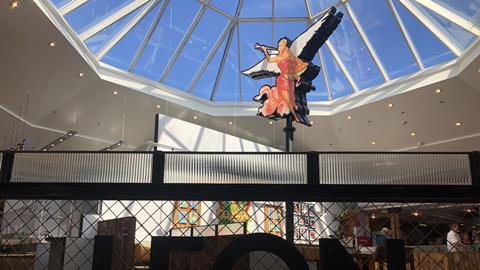 A new era for Leon

The acquisition of Leon for a reported £100m marks the end of an era for a brand that has been led by one of its original founders for 17 years.

John Vincent, who created Leon with Henry Dimbleby and Allegra McEvedy in 2004, was inspired by his father on his mission to make fast food with a greater focus on wellbeing and sourcing.

Hailed for its progressive company culture, and innovative and agile business, during the pandemic Vincent was central to the FeedNHS initiative, while Leon pivoted to providing essential food boxes.

Yet the drop-off in footfall in city centres and travel hubs inevitably took its toll on the business, and Leon entered into a company voluntary arrangement (CVA) in December – though no closures or redundancies were reported.

Given this context, it seems unlikely the sale of Leon to EG Group will have been according to a preferred timetable.

But anyone who has followed Leon’s journey will know it was always part of the original ambition to bring this healthier model of quick-service to a mass audience, not just to metropolitan bubbles.

The pair insist Leon’s “culture and values closely align with our own”, while Vincent remarks the brothers are “committed to sustaining and further strengthening the values and culture”.

The acquisition sees EG, which trades as Euro Garages and has 5,900 petrol forecourts, further strengthen its penetration into non-fuel and foodservice operations.

The group runs more than 700 foodservice outlets in the UK & Ireland of which 310 are from standalone premises.

Running a number of third-party brands, including Starbucks, Burger King, Greggs and Subway, EG owns one of the largest KFC franchises in the UK.

Alongside its targeted takeover of Caffe Nero, Leon gives it a strong proprietary brand, a leader of its category, with lots of expansion potential across its estate.

“It’s already shown it can move out of its London base to become a national brand. It hits provenance, it hits health. It could be the next Pret or the next Nando’s.”

Martin cites Leon’s learnings on travel concessions with HMSHost as key to its development into a more systematized brand attractive to EG Group.

The question will be whether the brand can maintain the “slightly quirky” identity under Vincent with him having departed.

“It’s not going to be easy because obviously John was a big part of that,” Martin says.

“You’re losing a very strong character, and it will be a test of the brand culture if is survives him leaving.

“The core thing is keeping that provenance and health story absolutely spot on. If you can keep that you can roll it out.”

Having been attracted to the strength of the brand and its structural on-trend credentials, it seems unlikely the Issas will be radically overhauling it.

Nor should they need to make changes at the managing director level, a position which is overseen by Nick Ayerst, who has ample experience in travel hubs having led TRG Concessions.

On the financial side, some analysts and industry insiders told MCA that £100m seemed rather steep for a leasehold business that has been through major challenges and a financial restructuring.

While the details were not disclosed, the deal includes debt, and MCA understands the reported sum is an accurate representation.

So even if external circumstances may have dictated the timing, it is difficult to describe the acquisition as a distressed sale.

Graeme Smith of AlixPartners says as a “leading light” in its category, the buyers will have been prepared to pay a good price for its future potential.

He tells MCA: “You’ve got the opportunity to buy one of the leading players in the market, and the rollout conditions should be more favourable over the next two years, because property costs will be lower, demand will be high, returns on capital should be higher, so you can justify paying tomorrow’s price today.”

Meanwhile investors Acitve Partners and Spice private equity will have been ”holding out for full price”, Smith says.

With opportunities to plug Leon into a large forecourt estate, both nationally and internationally, Smith says there is also a chance to get ahead with the trend for electric cars, and potential longer dwell times.

“It’s an interesting move in terms of the future of fuel stations, as we move into this kind of age of electrification,” he says. “There’s an increasing trend to fuel forecourt owners thinking, if people are going to be recharging, that means they’re going to be with you for 10 minutes, so how do they spend that 10 minutes?

While the Issas might represent the management team of the new ownership, they are backed by a familiar private equity firm in TDR Capital, the backer of Stonegate.

“Their strategy to own brands which they have on their forecourt, that’s very compelling,” he says.

“They’ve got something like 5,900 sites worldwide. You could sell a lot of Leon burgers through those!”

Neill said the advantage of acquiring a portfolio of in-house brands was clear.

“Having been a franchisee many years ago I can see the benefits. Do you want to have to deal with some regional executive for KFC? Probably not.

“The most important question I think is whether they can assimilate the brand into the system and make it work for the culture of the brand and the ethos. Leon was always about something a little bit different.”

Neill said while the Issas will naturally want to maintain the integrity of the brand they have bought, it will inevitably undergo some changes under the new owners.

“As things become part of a conglomerate, decisions are made at different levels, the cost of capital is different,” he says.

“If you become part of a bigger enterprise, most portfolios businesses have to compete to be on top.”

With a deal to take over Asda hoped to be cleared soon, and the Issas snapping up the debt of Caffe Nero, there will be various opportunities to play with Leon across EG’s fast-growing estate.

The company plans to invest in Leon and open around 20 sites per year from 2022, while develop its non-restaurant products across its convenience retail proposition.

The Issas said the acquisition presents an opportunity to develop the menu offer, the various concession formats including drive thrus, and build on the existing network by exploring opportunities across its own existing estate.

They said the equity investment “aligns with our commitment to being a committed foodservice operator globally, delivers financial benefit to our underlying business, and supports broader commercial strategies to be able to better realise further growth opportunities.”

As big-time dealmakers, EG Group has been described as highly-leveraged, with a £7.8bn debt pile, though Graeme Smith is relaxed about this.

“Whenever you’re involved in very large deals, then you’re often sourcing your finance from multiple different parties, whether it’s a private equity partner, lenders or even the bond markets,” he says.

“It doesn’t seem to me as anything unusual around how they’re going about the financing, and actually, Leon is relatively small compared to Nero and Asda.

“They are looking at a store footprint across the UK with filling stations, with Asda locations, with existing Neros and Leons. They may own a number of the sites that they want to open Leons in. There is lot of flexibility, a lot of options.”

Martin sees the sale as the natural next step for the brand.

“Leon has gone through some interesting iterations,” he adds. “It launched well, it had a tough middle period, and it’s come back with more focus. I think a lot of that success in more recent times has been driven by the fact that they have understood the essence of the brand and then systemized it – and there’s nothing wrong with systemising stuff, because that’s the way you can scale.”

A new era for Leon
The acquisition of Leon for a reported £100m marks the end of an era for a brand that has been led by one of its original founders for 17 years. On first glance, EG Group’s petrol forecourt and foodservice concession business might not seem like an obvious cultural fit to Leon’s more touchy-feely brand. But anyone who has followed Leon’s journey will know it was always part of its founders’ vision to take its healthier quick-service offering beyond metropolitan bubbles to a mass audience.