The original team behind Franco Manca are to launch a new Italian pasta bar concept, Strozzapreti, at Seven Dials Market later this year.

Created by co-founders of Franco Manca Bridget Hugo and Giuseppe Mascoli, alongside pasta guru Andrea Beccaceci, the concept claims to offer a fresh approach to pasta and has a keen focus on sustainability.

In addition to pasta dishes, made from durum flour and organic English spelt, the menu will feature antipasti and twists on classic Italian pudding ingredients. Items include strozzapreti four cheese fonduta with herb infused oil, and pappardelle with rabbit ragu and Marsala livers.

Hugo commented: “Tasting and designing is the most creative and fun part of producing food and I’ve taken a lot of inspiration working with Beccaceci and Mascoli to establish these entirely new pasta dishes.”

Joining Strozzapreti, in the space set aside for independently-owned restaurants, will be former MasterChef winner Tim Anderson’s Japanese fusion restaurant Nanban. It will be his second site, following his debut in Brixton in 2015. 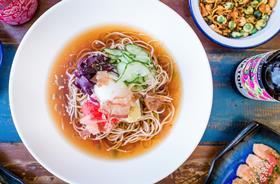 The restaurant will source local produce from the market’s Cucumber Alley, with dishes to include: dry lamb vurry Ramen with padron peppers, tea-picked egg and Montgomery cheddar, as well as two weekly dishes inspired by the market’s fresh produce.

Seven Dials Market, Kerb’s first permanent site, is due to open in September within the 19th century Thomas Neal’s Warehouse.