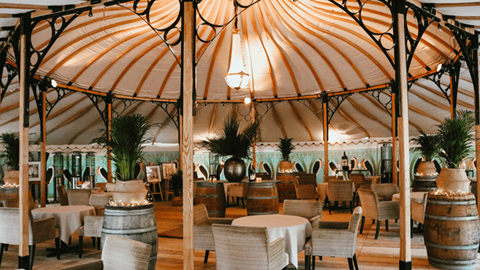 Outside chance: hospitality gears up for alfresco April

Many operators are throwing everything they have at outdoor dining this April and beyond. But will the industry make hay while the sun shines or will the whole exercise be a damp squib?

While awning manufacturers and patio heating salespeople will have reacted to the Government’s roadmap with unbridled glee, hospitality has - on the whole - been more muted in its response.

Assuming all continues to go well, Boris and co will allow businesses in England to open for outdoor eating and drinking from 12 April.

But those with any experience in the sector are all too aware of the wind swept and rain-soaked realities of early Spring alfresco dining.

To state the obvious, the UK is not the Med. Prolonged cold snaps and regular mid-service washouts are not unlikely and - until indoor eating and drinking is permitted on (hopefully) 17 May, at least – alfresco is an even higher stakes game than usual because operators won’t be able to usher customers inside when the rain clouds draw in.

While some are preparing for an alfresco party, for many others it’s an outdoor bash to which they simply aren’t invited. According to CGA research, fewer than half of England’s restaurants, pubs and bars have any outdoor space in which to operate and of the 43% of sites that do have beer gardens, terraces, or other external areas that could host guests, many will be so small that opening for alfresco-only won’t be viable.

The proportion of venues with outdoor space rises to 68% in rural parts of England, but drops to 46% in suburban areas, and is just 25% on high streets. It is therefore unsurprising that it is those operators of town and city centre-based pubs and restaurants that are the least enthused about the Government’s proposed backyard bonanza. 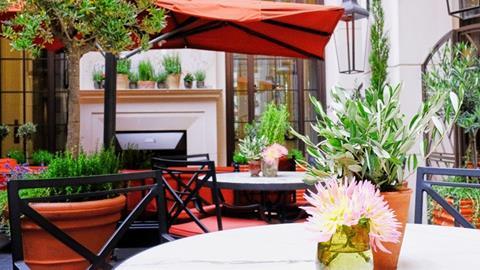 Pub company Young’s will open some of its sites “in desperation” but says that restrictions on social gathering – the rule of six or two households rule will be in place – will hamper its trading prospects. Meanwhile, restaurant bar group Loungers expects to open less than 10% of its 170-strong UK estate come 12 April.

The more upmarket D&D London is better placed to reopen in mid-April thanks to a number of its venues having large terraces and rooftop areas. It hopes to open roughly half of its restaurants in England and – with foreign travel likely largely off the menu this year - will style its spaces on popular holiday destinations. But in common with a great many other hospitality bosses, chairman Des Gunewardena’s enthusiasm for this alfresco period is tempered by a deep frustration at not being allowed to get back to normal trading sooner.

Like many restaurateurs, Mitch Tonks used to view alfresco as a nice to have that could sometimes be more trouble than it was worth due to the UK’s famously fickle weather. But last year he was forced to embrace outdoor dining when his flagship restaurant The Seahorse flooded just before the summer season.

Thinking very much on his feet, Tonks took full advantage of his local council’s more helpful and progressive stance on outdoor dining rules to launch Seahorse Al Mare in a fully-fitted-out marquee opposite the restaurant on Dartmouth Embankment. Magnums of rosé flowed and a great time was had by all.

The experience has given Tonks cause to totally rethink alfresco dining, and not just because it is the only option available to him upon reopening. “The pandemic has changed how customers view outdoor dining.

They have rediscovered public spaces,” he says. “Alongside this, councils are relaxing regulations. We’re viewing April as an opportunity to get better at outdoor dining and meet the huge demand for eating out, but it will continue to be a big focus for us even after we’re able to open for indoor dining.”

The marquee that houses Seahorse Al Mare will return but only to serve drinks and nibbles (with The Seahorse now fixed and ready to go it’s not operationally viable to run two full dining offers side-by-side). But Seahorse Al Mare will live on in the form of a fully mobile restaurant that serves up to 40 people.

Meanwhile at Rockfish - Tonks’ more casual restaurant brand - all eight sites are set to reopen for alfresco dining on 12 April. There is significant variance of outdoor facilities across the South West-based group and thus a number of sites are being temporarily reconfigured and extended to take full advantage. These include Rockfish Plymouth, which will have a fully lit outdoor space for more than 100 covers with various bars including one run in partnership with a local brewery. But even the group’s smaller alfresco areas will be up and running, including one with just 10 covers.

“A lot of people have really missed Rockfish. If we can serve 10 people really well in the way that they’re used to it will be worth doing,” Tonks explains. “We’ll do a bit of takeaway alongside, but it won’t be financially viable at that particular site, although we do hope to turn tables constantly.” 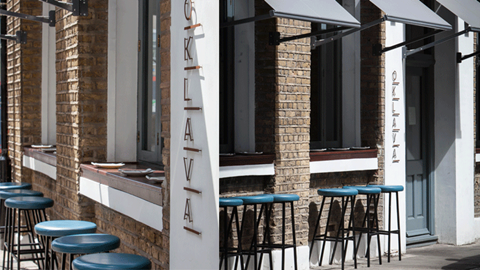 In London, chef restaurateur Selin Kiazim is also taking the view that small can be beautiful. Her modern Turkish restaurant Oklava has four window bars that can - at a push - seat up to four each. “It’s not much. Our best-case scenario is 20-25 covers a service,” she says. “But frankly we’ve all had enough, and we want to get going again.”

In common with many other restaurants emerging from the chaos of the past 12 months, there have been staff changes at Oklava and people have had to be moved around. “We want to ease the team back into it and get them used to their new roles,” continues Kiazim. “And we also want to start to get our name out there again and show people who we are and what we do.”

The Shoreditch restaurant will take bookings from Wednesday to Sunday and offer a bar menu focused on snacks. Guests will largely be served through the windows by chefs. To make the numbers add up staffing levels will be lean, most likely a couple of chefs, a kitchen porter and one waiter per shift.

Indeed, the Government’s strategy for reopening hospitality could even be seen as reckless. Cash-strapped businesses that are desperate to resume trading are being tempted into investing heavily into what could be a damp squib of a five-week trading period.

“Government clearly hasn’t spoken to the trade. Last April was beautiful but this year it’s just as likely to rain,” says Birmingham-based chef restaurateur Andreas Antona. “Most restaurants aren’t set up for outdoor dining so early in the year.”

But for Antona and a great many others, the entrepreneurial spirit has kicked in. His Michelin-starred Simpsons and The Cross restaurants will reopen from 12 April with a similar menu to what would normally be offered inside with guests housed in heated stretched tents.

Westminster-based hotel Corinthia London is also looking to create a holiday atmosphere. Designed by David Collins Studio, its courtyard will be transformed into a Mediterranean garden with lemon and olive trees, herbs and bougainvillea. Executive chef André Garrett has created a Mediterranean-themed menu that includes the likes of yellowtail tartare with apple, lemon and coriander; lobster linguine with lemon, cherry tomatoes and basil; and grilled brill with fennel and champagne.

Brighton and Hove-based restaurateur Raz Helalat is also viewing this five-week trading period as a way to get his people match fit. “The team’s condition is a concern. It’s going to take everyone a bit of time to find their sixth gear,” he says. “In the peak of summer Brighton is full-on, especially around the seafront. Our employees are out of their routine. April will be a good way of breaking them back in.”

While CGA’s research found that 57% of venues (some 35,000) have no outside space, some of them may have the option of temporarily setting up on nearby public or private spaces. Local authorities including Westminster, City of London Corporation and Manchester City Council have allowed hospitality business to take over certain streets and other public spaces. 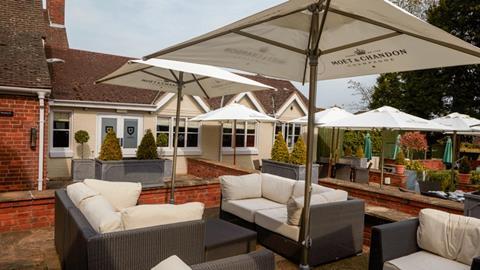 Earlier this month, alfresco dining was given a further boost when the Government extended planning exemptions designed to make it easier for hospitality businesses to set up al fresco dining areas by another year.

Housing and Communities Secretary Robert Jenrick has said that he is determined that red tape won’t get in the way of a great British summer telling council leaders to give restaurant and pub owners a break after a year of enforced closures with planning rules for al fresco dining and temporary shelters expected to be waived unless there are ‘exceptional circumstances’.

Jenrick has even said that he wants to make this relaxation permanent, meaning that in hospitality’s case Covid-19 could trigger a major rethink from both central and local government on how public spaces are used.

Chef Adam Byatt and his business partner Angus Jones would be beneficiaries of such a move. The pair were planning a new terrace for their Michelin-starred Clapham restaurant Trinity but red tape held up their application meaning that they weren’t able to open last summer. Byatt says he now expects to launch Outside @ Trinity as a bolt-on to his flagship in April following an investment of between £20,000 and £30,000. The terrace will seat around 30 covers and will offer a simple Mediterranean-style menu.

Outside chance: hospitality gears up for alfresco April
Many operators are throwing everything they have at outdoor dining this April and beyond. But will the industry make hay while the sun shines or will the whole exercise be a damp squib? While awning manufacturers and patio heating salespeople will have reacted to the government’s roadmap with unbridled glee, hospitality has - on the whole - been more muted in its response. Assuming all continues to go well, the PM will allow businesses in England to open for outdoor eating and drinking from 12 April. But those with any experience in the sector are all too aware of the wind swept and rain-soaked realities of early Spring alfresco dining.