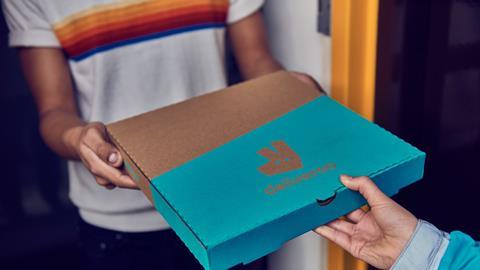 It was billed as the biggest London listing of the last ten years, Chancellor Rishi Sunak hailing the delivery company as a “true British tech success story”.

But Deliveroo’s big-ticket IPO got off to a poor start yesterday morning.

Others were less charitable, calling the public debut a “catastrophe” and an “absolute disaster”.

In the run-up to the listing, the company had already lowered expectations with an offer price which valued the company at the lower end of £7.6bn – down from a touted £9bn market cap last week.

Matters deteriorated rapidly as trading opened, its shares plunging by as much as 30%, wiping more than £2bn off its value.

While prices recovered slightly, it was still the worst first-day performance for a £1bn+ London listing on record, markets platform Dealogic said.

If the flop came as a surprise, the past week was laden with none-so-subtle hints about the precarious position of the tech unicorn.

The run-in to the float become overshadowed by issues surrounding its riders’ lack of workers’ rights, as major pension funds voiced unease with the risk associated with such a business model.

Another sticking point was the company’s dual class share structure, which will give founder and CEO Will Shu tight control over the company, despite no longer having a majority stake.

Most crucially to the restaurants and bars that use Deliveroo, was the impression that the company had overvalued itself based on a lockdown trading climate, investors concerned that consumers will transfer their spending back to dine-in once it opens up.

“Not all floats go perfectly, but one of this magnitude – the largest in London for a long time in the strategically important consumer tech arena, it’s a notable consumer brand that is very well known to customers and suppliers. Clearly there’s a lot of time ahead for it to re-establish its share price and valuation, but from a first morning perspective it’s an absolute disaster.”

Having got off to such an awry start, questions will inevitably be asked of Deliveroo’s bankers and advisors Goldman Sachs and JP Morgan, who advise on price after sounding out potential investors.

It does not take such a cynical train of thought to speculate that the timing of the float was pushed through to achieve maximum value while lockdown was still in place and Deliveroo was still riding high on order volumes.

“Market conditions over the past year have been pretty perfect for the likes of Deliveroo and the timing of its IPO is not coincidental in that respect,” Black said.

“It’s therefore reasonable to anticipate over the next year that Deliveroo will struggle to achieve the growth rates it has in the last year. I hope that’s the case as well because if not it will mean that the pandemic will have restruck.”

AJ Bell investment director Russ Mould agreed, telling MCA that despite assurances, it was impossible to view Deliveroo’s apparent success over the past year outside of the lens of lockdown.

“When restaurants reopen it is a challenge,” he said. “Will Shu has looked to address that, he put out a trading statement saying things were going well. Although that was still when we were in lockdown, and the company’s business model has been perfectly adapted, perfectly suited to a lockdown.

“Clearly some investors will be thinking, ‘won’t people want to get out of the house if they’re permitted to, and they feel safe to?’

This shifting consumer mindset, reinforced by a change in government messaging from “stay at home” to “go out and enjoy yourselves”, has added to the scepticism over Deliveroo’s future value.

It operates in a highly competitive marketplace, and its strength in metropolitan centres might give false confidence that it is bigger than it actually is.

“You are not just talking about Uber Eats and Just Eat,” Mould said. “You are talking about meal kit delivery companies, online grocery companies, restaurants and bars. There’s a lot of competition out there which is a risk and that needs to be reflected in valuation.”

Another glaring issue is the fact Deliveroo is yet to turn a profit, which makes it difficult to value.

Shu said during lockdown it had become profitable at an operating level, but still posted 2020 losses of £223.7m, from transactions of £4.1bn.

A market cap of £7.6bn means the company is worth 6.4 multiples of last year’s revenue, which is some way above rival Just Eat’s 4.8 multiples, despite the lower price.

“That means there’s pressure for Deliveroo to deliver the goods, or its share price will be in the firing line,” Sophie Lund-Yates, analyst at Hargreaves Lansdown said.

Some of the excitement is justified. “Deliveroo has been seriously buoyed by lockdowns, and as restrictions ease, we could see a permanent increase in demand for delivered food,” Lund-Yates said.

“This is one of Deliveroo’s strengths – it offers higher quality restaurant options than some peers, which, coupled with its personalised app content and hyper-localised delivery approach, could hold it in better stead.”

The cash hoard from the IPO will be used to fund expansion, in areas like its delivery-only Editions model. “All in, Deliveroo should have decent firepower to chase growth,” Lund-Yates added.

Another contributing factor to the flop which is more difficult to quantify is riders’ rights.

Deliveroo acknowledged in its prospectus that there were several regulatory probes into the status of its self-employed rider network, and that its entire business model may be in doubt if it was forced to make them employees.

The Uber Supreme Court judgement, as well as several major investment houses publicly saying they would not invest in Deliveroo, brought hammer blows down onto this weak spot.

“The growing focus upon Deliveroo’s labour process has absolutely contributed to concern by a lot of institutions whether it’s the sort of business they want to be associated with,” Black told MCA.

Pension funds, which may also invest in the ethically dubious tobacco and mining industries, are just as likely to have been turned off by the risk to Deliveroo’s business model, than the issue of its questionable riders’ rights.

“If you look at any company, you assess its competitive position, its financial performance and prospects, its management acumen and then you tie it all in to whether you think the shares are coming in at a sensible valuation or not,” Mould said.

“The more risks that you perceive with a business model, the financial performance and the management team, the lower the price will reflect that.

“It may be a question of pure ethics, or it could be hard-nosed investment risk.”

“I think there’s also a contagion here to the extent it’s something that may weave into the customers of Deliveroo,” Black added.

“Is a restaurant or supermarket chain happy to be associated with Deliveroo, given its labour practices?”

How Deliveroo responds to this disappointment to a large extent depends on trading conditions, and whether it can convince investors there is still potential beyond of lockdown, as consumers return to restaurants.

“The pandemic has offered a structural growth opportunity, but it’s worth asking if lockdowns mean things are as good as they will ever be for a takeaway service,” Lund-Yates adds.

“The longer-term outlook depends on how demand holds up in a post-pandemic world, and if that road to profitability looks any clearer.”

Deliveroo IPO an ‘absolute disaster’
It was billed as the biggest London listing of the last ten years, Chancellor Rishi Sunak hailing the delivery company as a “true British tech success story”. But Deliveroo’s big-ticket IPO got off to a poor start yesterday morning. Others were less charitable, calling the public debut a “catastrophe” and an “absolute disaster”. If the flop came as a surprise, the past week was laden with none-so-subtle hints about the precarious position of the tech unicorn.