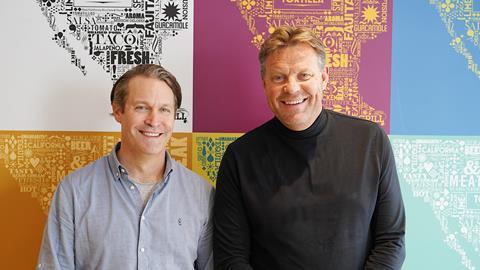 Brandon Stephens and Richard Morris’ Californian-inspired brand Tortilla has come out on top in the burrito wars and looks to be eyeing a sale, writes Restaurant magazine’s Joe Lutrario.

Were it not for the restaurant branding and heady smell of Mexican food you’d think Tortilla’s Fitzrovia head office was a tech start-up. A half-finished game of giant Jenga teeters on the coffee table, hip hop thuds out of a wireless speaker and the staff are young and trendy-looking.

It’s lunchtime and much of the 30-strong team have just returned from the burrito brand’s nearby Market Place site laden with foil-wrapped burritos, bags of tortilla chips and little plastic pots packed tight with salsa and guacamole.

Our conversation with founder Brandon Stephens and managing director Richard Morris is accompanied by a soundtrack of mainly West Coast rap music, punctuated by the occasional crunch of a tortilla chip.

US-born Stephens did indeed work in tech prior to launching the business in 2007. Tortilla wasn’t the first fast casual burrito player – that honour went to Barburrito, which opened in Manchester in 2005 – but it was within the first wave opening in the same month as Chilango (which, coincidentally or otherwise, also chose Islington for its debut restaurant). 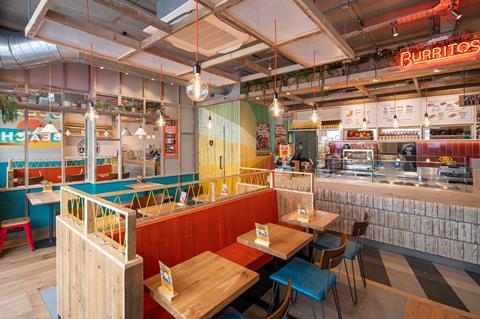 “There was a lot of education required,” says Stephens when quizzed on what it was like to bring a relatively unfamiliar dish to the UK market. “Alongside that, when we launched we did not have the quality of food, service or ambience we needed. I was new to food and restaurants. Immediately after the launch I realised there were a lot of things I could have done but didn’t. We didn’t have the proper processes in place. It was all rather haphazard, especially considering where we are now.”

In the early part of this decade there were several groups vying to become the national burrito chain. Indeed, competition in the space was so intense – at one point there were eight brands with a near-identical operational model and product mix – that it was dubbed ‘the burrito wars’ by ourselves and other commentators.

Fast-forward to the end of the 2010s and Tortilla is the clear winner of the UK’s ‘guaca-melee’ with 41 sites (its closest rival is Barburrito, which has 22 locations). Stephens doesn’t appear to be comfortable with Tortilla being declared the victor. “There are multiple winners. We’re the largest. The brands that started in the same timeframe are all still around.”

Morris is rather happier with the idea. “I think Brandon is slightly underplaying it. We are clearly the leader. We have twice the number of sites as anybody else. Plus we have a further eight locations in the Middle East under a franchise.”

So how did Tortilla manage to steal a march on its competitors? Having access to a great deal more cash than its rivals early on has been key. In 2011, with seven locations under his belt, Stephens did a deal with Quilvest that saw the US-based private equity house pump in £3.5m. Shortly after Morris joined the business in 2014 from Loch Fyne, Tortilla secured a further £2.5m in the form of bank financing from Santander.

“Having access to that sort of cash early on allowed us to take premium sites in the right places,” says Stephens. “We’re now 40-odd restaurants in but have yet to close a location, which is unusual. Being well-funded also allowed us to put in a proper head office to support the growth and keep everything consistent. A lot of businesses hit double figures without having support in place, and it’s tough.”

“You don’t want to be trying to change the wheel on a moving car,” says Morris. “That cash also allowed us to put a central production kitchen in place early on, which immediately gave us a consistent product across the estate.”

Another crucial factor behind Tortilla’s success is the strength of its board. With no experience in the sector, Stephens surrounded himself with some of the best in the branded sector, including David Page and Robin Rowland. 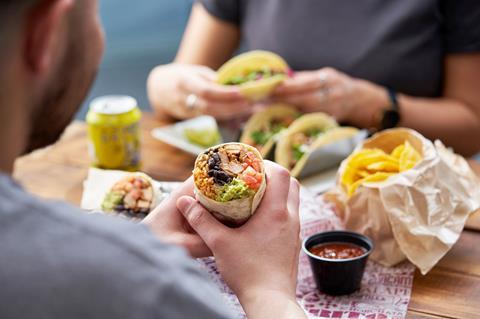 Tortilla is inspired by the Mexican food served in California rather than what’s served in Mexico itself. “Burritos were embraced by the US because they’re easier to pack with toppings – they can take far more than a taco,” says Stephens, who grew up in the San Francisco Bay Area.

The burrito is Tortilla’s bestseller, accounting for 80% of orders. Naked burritos – simply the fillings placed in a bowl – are the second most popular, with tacos, quesadillas and nachos making up a very small part of the sales mix.

Tortilla’s setup is identical to its competitors. Customers move down the counter speccing their chosen menu item with rice, beans, salsa and protein (options for the latter include braised pork, grilled chicken and the recently launched pulled jackfruit).

Prices are competitive, with most medium items £5.80 and large items priced at £6.80. This approachable price point has allowed it – and its competitors – to roll out relatively easily. The fact that a number of brands can take A1 sites (see Use class warfare) has also helped.

Burritos are also a huge success story in delivery, largely because they undercut pretty much every other delivery product, with the exception of fast food burgers. “We do very high volumes but the trade-off is that we have a fairly low average spend,” says Morris. “Rather than try to fight it we have embraced it.

Clearly we’re better off selling a burrito to someone over the counter but the gap is closing. Our price point is necessarily slightly higher than in the stores and we have a competitive commission percentage at Deliveroo because we have never worked with anybody else.”

Between 15% and 20% of Tortilla’s total sales are from Deliveroo, but that figure is brought down by a number of sites that don’t do delivery at all (typically those in shopping centres and transport hubs).

Such is the success of its delivery business, Tortilla has developed a smaller format to capitalise on locations with a strong delivery catchment but less demand for eat-in. Opened on Putney High Street in 2017, the first ‘baby’ Tortilla (an internal designation rather than a customer-facing one) has been a big success, says Morris.

“We immediately hit forecast with a 50:50 split between in-house and delivery sales. The site is less than 700sq ft. It’s very profitable for us because it makes for both low capital expenditure and low rent.”

Following the success of Putney, some of Tortilla’s other smaller units have been retrospectively designated as baby tortillas and two all-new sites have opened under the model (Southwark and Soho). Though they don’t yet make up a significant proportion of the overall estate, these shrunk-down locations are described as a big focus for the group.

The company is also eyeing a dark kitchen location but is yet to find one that won’t cannibalise an existing Tortilla. “We will likely do it in an area where we eventually want to open a store to test the market out,” says Stephens. “Manchester is a possibility as we don’t have a site there at the moment, as are some areas of London. It’s a very different model: small capex and small EBITDA as opposed to high capex and high EBITDA at the stores. But it’s absolutely something that can work for us.”

Tortilla slowed its expansion at the back end of 2017. “We all felt that the market was becoming overheated. As a business we weren’t prepared to get into silly games over ridiculous premiums and high rents. We have since been proved right,” says Morris, alluding to the considerable pain many brands have caused themselves by taking average sites with excessively high rents. “Fortunately, we have an understanding partner in Quilvest. They did not push us to open.” 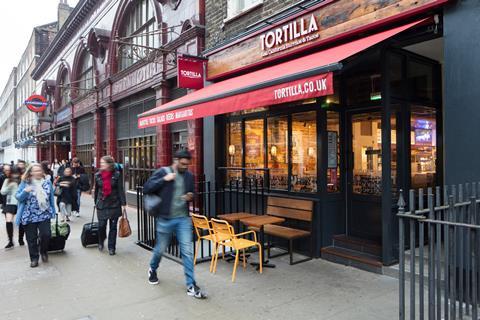 “A lot of deals that were coming through just didn’t make sense in terms of return on capital,” adds Stephens. “We saw a lot over that period and approved almost nothing. That said, some of the discussions we had back then have led to the sites we’re opening now.”

With average rental prices now (finally) coming down, Tortilla is back on the expansion trail. The past few months have seen the brand open its 40th and 41st sites, in Cambridge and Oxford. One more site is likely to open this year and the pair predict four or five new openings in 2020.

The company has also just signed an agreement with food travel group SSP to open in London’s Euston Station, with a further four sites planned for ‘key travel hubs’ next year. “This creates fantastic growth opportunities for Tortilla,” says Morris.

With some burrito brands doing better than others – in September, rival Benito’s Hat entered into a company voluntary agreement – do the pair predict consolidation in the space?

“What we do and how we do it is very similar [to other burrito players]. Strikingly so, in fact,” says Stephens. “We serve a very similar set of products; the processes are the same and the environment is similar. It certainly lends itself to consolidation. But I’m not sure whether it will happen or not.”

So far, Barburrito’s acquisition of five-strong Scottish chain Pinto Mexican Kitchen in 2015 is the only example of a burrito player swallowing up one of its competitors. “A big challenge is that, inevitably, our competition have units that are very close to our own,” adds Morris.

Stephens and Morris appointed advisers Spayne Lindsay early this year but are quick to play down the prospect of an imminent sale. “A lot gets made about stuff like this,” says Morris. “We have proved that we’re a good business, and we’re potentially a good franchise too. It makes sense to get someone external to help us with that process. Clearly it’s something we eventually want to do, but we’re in no rush.”

Due to his ongoing work with US private equity company Trispan, Stephens has better intelligence than most on the restaurant landscape and what multiples are being paid for the few businesses that have sold (he’s also involved with a number of other restaurant businesses, including fast casual chicken concept Thunderbird). “This isn’t a time to do anything. There is huge uncertainty about Brexit and investment is just not happening. New developments aren’t even coming to market. Everything is on hold,” he says.

It’s unlikely that Tortilla will be short of suitors: it’s easily scaleable, has a proven franchise model and is still largely London-based, so there is room to grow in the regions.

And while fast casual operators are by no means immune to the headwinds the wider industry is experiencing, this newer sector is having a far better time of it than casual dining. “In 2008 we saw our sales accelerate significantly. There is a flight to value for money from consumers when times are tough,” says Stephens.

“There is a lot of doom and gloom out there at the moment,” chips in Morris. “The big problem in casual dining is that there are a lot of people doing the same thing at the same price point. Most of the regional locations are over-served for that type of offer. This may well happen to the fast-casual sector at some stage, but at the moment there are fewer players.”

Wrap stars: how Tortilla won the burrito wars
Were it not for the restaurant branding and heady smell of Mexican food you’d think Tortilla’s Fitzrovia head office was a tech start-up. A half-finished game of giant Jenga teeters on the coffee table, hip hop thuds out of a wireless speaker and the staff are young and trendy-looking. It’s lunchtime and much of the 30-strong team have just returned from the burrito brand’s nearby Market Place site laden with foil-wrapped burritos, bags of tortilla chips and little plastic pots packed tight with salsa and guacamole.