Snapshot: Going to a McDonald’s drive thru during lockdown

We’ve all seen the headline grabbing queues outside McDonald’s drive-thrus since they reopened last week. So how is McDonald’s handling the pressure?

Having heard rumours of a two hour wait time at my nearby McDonald’s drive thru, obviously the only thing to do was to chuck the kids in the car and join in the fun. 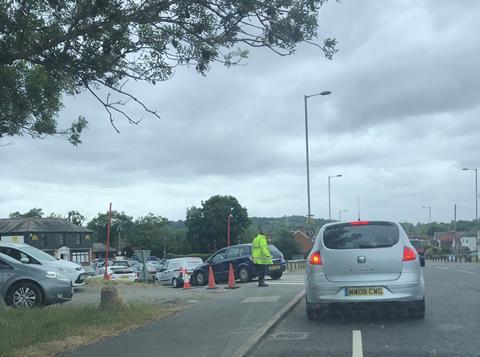 This particular branch is situated just off a main road, which could present traffic issues, but on arrival at 12.15pm there is only one car in front of me waiting to drive into the site. This is an unexpected bonus. 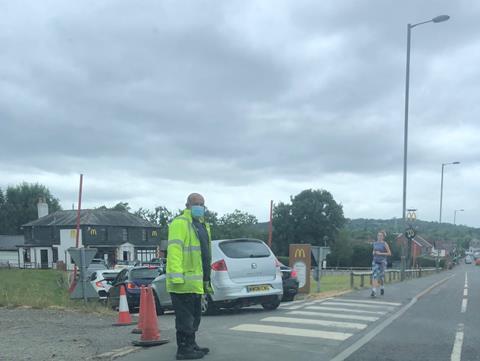 A gloved and masked employee in a hi-vis jacket is there to manage the flow. McDonald’s has stopped cars entering from both sides of the road to reduce any potential congestion. And the road is just about wide enough for cars to queue without completely obstructing the road behind, so although cars are forced to queue on the road itself, other cars can overtake without too much trouble. 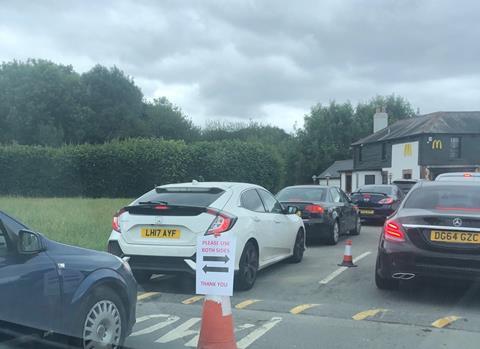 To speed up bringing cars off the main road and onto the site, McDonald’s has introduced a one-way direction of travel by opening up both lanes to head towards the fun. 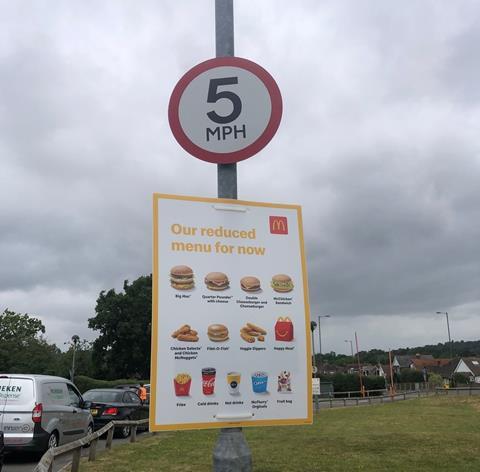 McDonald’s has introduced a reduced menu to simplify things, and has posted it near the entrance so we can read it as we inch along. At this point, the 5mph speed limit feels unlikely to be violated. 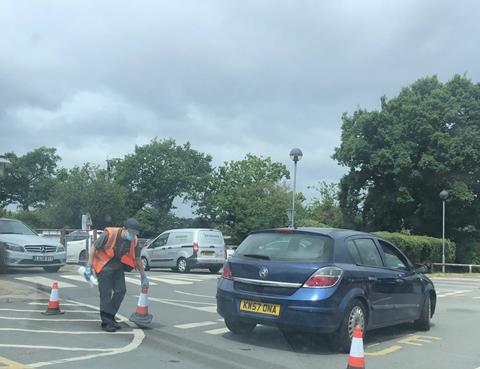 Another employee, in hi-vis vest, mask and gloves, places bollards in front of cars until they can move forward to keep the exit clear (due to what has always been an unusual modus operandi at this location, drivers who have collected their McDelights need to exit by driving through the queue of cars waiting to order). 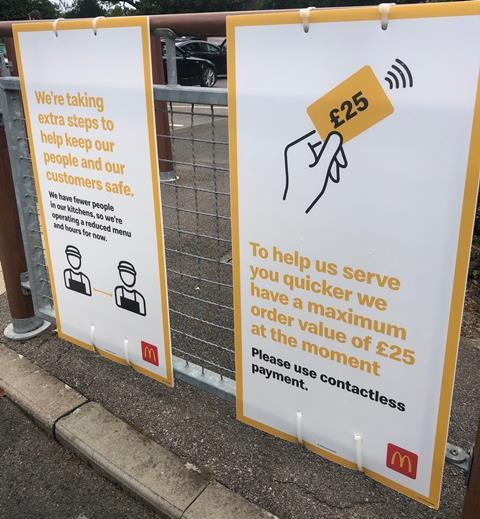 It’s been about 20 minutes since we joined the queue. There is more signage to remind people there is a £25 limit on orders, and to explain why they have fewer staff operating and a reduced menu. 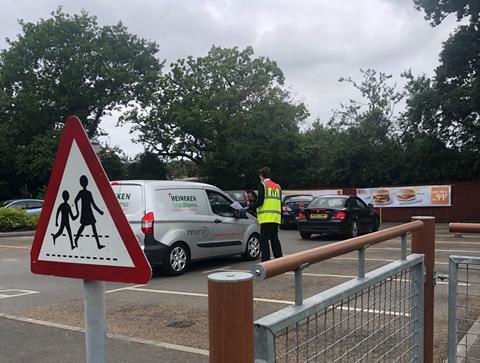 Another employee is also placing bollards at the point where cars filter from two lanes into one. This is clearly a potential pressure point for any drivers driven insane by the infuriating combo of queuing and hunger. Desperate for McFood, they may try and cut up the adjacent competing car, so the potential for beeping, shouting, and finger pointing is a clear and present danger.

But the employee, who is wearing PPE and a McTie, cheerfully speaks to every driver, reminds them of the reduced menu, explains the £25 limit, and says which car is next in line to snake into the single lane. This friendly and well organised intervention mitigates the potential for hangry-motivated instances of McRoad rage. 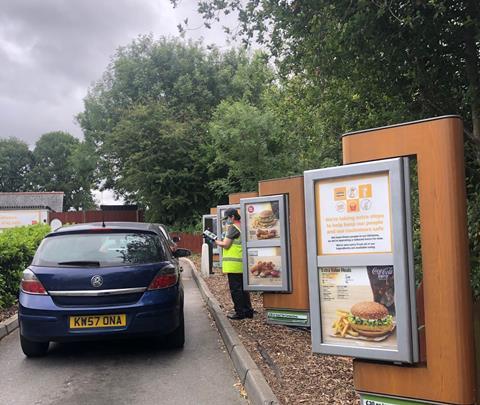 There are two order points in operation, the standard ordering booth and a PPE-clad employee with an iPad. And from this point on, having queued for 34 minutes, things suddenly warp to normal speed. Doubling up traffic at the start and doubling up orders at the end, with a managed pause inbetween, works well.

The people inside the payment and collection booths are cheerful, friendly, and efficient. Contactless payment is encouraged, but the car in front pays with cash, their change is handed over in a small plastic bucket to reduce hand to hand contact. 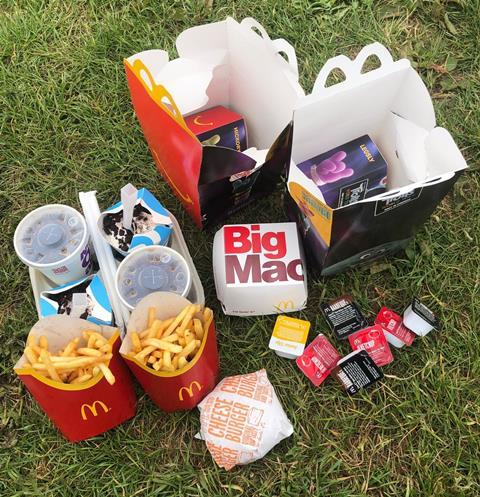 A Cheeseburger, a Big Mac, Chicken McNuggets, Fries, McFlurrys, loads of sauce, toys, Coca-Cola, everything is included as it should be, with the bonus addition of two portions of large fries and some salsa dip. The extra fries and dip weren’t charged for. Less an error and more likely a little thank you for hanging on and staying patient, and it’s not a bad idea – sitting in a queue for half an hour isn’t fun, but who doesn’t like free fries? 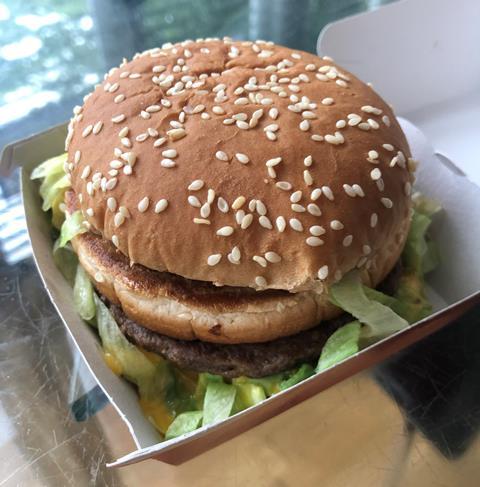 Venue: McDonald’s (drive thru only)

Order points: Two (one standard, one McDonald’s employee with tablet)

Everything present and correct: Yes, plus two bonus Large Fries and Salsa Dip

Verdict: Only the biggest Big Mac fan would go to a McDonald’s drive thru if it always meant waiting in the car for 40 minutes before receiving their food, but these are unusual times. This McDonald’s franchise has delivered a well thought out system that adapts an already difficult layout. Pre-lockdown the entire site was due for redevelopment and reorganisation due to the problematic flow of traffic, but the friendly communication from employees, and constant signage with polite and upbeat messaging, meant I didn’t hear a single beep or anguished howl of frustration from anyone, even from the back seat, despite the lengthy wait. We are all adapting to various challenges on a daily basis. On this example alone, McDonald’s are doing it very well indeed.