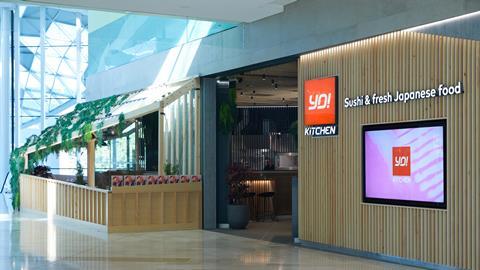 Say hello to the newest version of Yo!

Colourful, innovative and fresh, it also had entertainment on the side thanks to its novel kaiten conveyor belt.

Remarkably, the novelty hasn’t worn off, even after 22 years.

Yo!, which dropped the ‘Sushi’ in September to signal to the squeamish that it offered more than just raw fish, reported a UK sales hike of 5% to £88.9m in July.

But it’s is no longer alone in representing Japan in the casual dining sector like it was when it arrived. Itsu, Wasabi and Wagamama alone have a combined 260 sites in the UK between them, while Yo! has 70.

None of its rivals have the Yo! fun-factor in the shape of the kaiten belt, but they all serve up tasty Pan Asian plates. So Richard Hodgson, who took over as CEO at Yo! in November 2017, decided to stir it up and try something new. 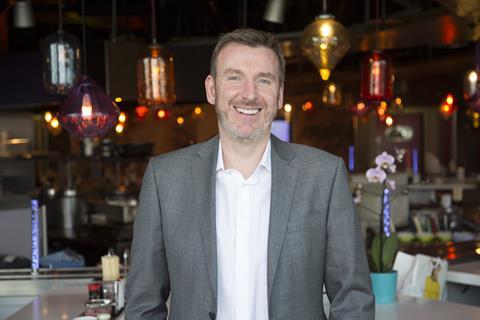 Dispensing with the belt
Hence Yo! Kitchen, which dispenses with the kaiten belt in favour of table service and introduces an entirely new menu filled with now familiar favourites like sushi, sashimi, katsu, ramen, gyoza and yakitori. Based in Westfield London it’s a “brand new concept, the first of its kind, and we also have a mini version opening next week in Dublin,” he says.

“It’s so different. The belt has been in place for 20 years, it’s never changed. Yo was all about innovation but there hasn’t been any for 20 years. It’s amazing it hasn’t had to, but every brand has to innovate to some extent, no brand can stand still. And I wanted to explore whether or not customers would accept Yo without a belt.”

Not that he’s taking his eye off the core Yo! estate, innovating with the belt to make it even more eye-catching.

“We have technology where we can put a surface over the top of the belt so it looks as if the plates are floating towards you, it’s like something out of Harry Potter. We can do it using magnets, it’s genius but so simple. We are also looking at having little robot trays that scuttle towards you and beep, you take the food from them and then they scuttle back to the kitchen. Too much technology today is just there as a gimmick but this technology actually improves the restaurant.” 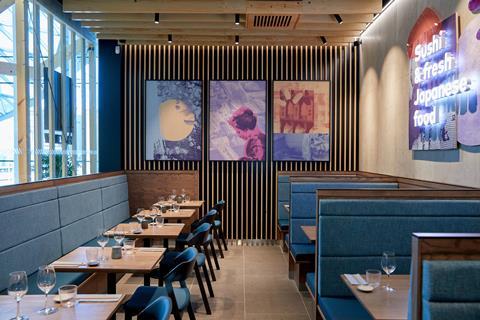 Yo! 2.0
But today is all about Yo! Kitchen, and all the feedback after being open for a week has been “very positive” so he is “very encouraged”. By Christmas, with Westfield increasingly packed with hungry shoppers, he will know “whether it’s going to resonate or not.”

He calls it “Yo 2.0, this is the next iteration. It won’t replace the 70 belt restaurants we have but it will complement them.”

He then orders a vast amount of food (to the waitress he jokes “we’re not greedy, we’re just showing off”) and it arrives quickly, with spicy pepper squid topped with fresh spring onions and red chillies first up. “The food comes out when it’s ready, like Wagamama, but you get the starters first and then the rest will come later.”

The food in Japan is the “best in the world,” he says, using chopsticks to pick up a piece of crispy squid. “I hadn’t been to Japan until I joined Yo and it’s so much better than anywhere else to eat, the cornucopia of different tastes and aromas is just amazing.”

The squid is followed by California rolls topped with crispy onions, charred shishito peppers liberally sprinkled with sea salt and lemon, a sirloin steak cooked perfectly pink and doused in black pepper sauce with lotus root crisps, a flaky plump chunk of miso black cod (“the same quality as Nobu but half the price”) and a light, fresh, beef tataki salad. Then an Empress platter arrives, filled with an assortment from the menu, including crossover curiosities like a sashimi ‘pizza’ (the menu calls it “Nippon meets Napoli”). Enough for four people, it costs £66, or £16.50 per person. 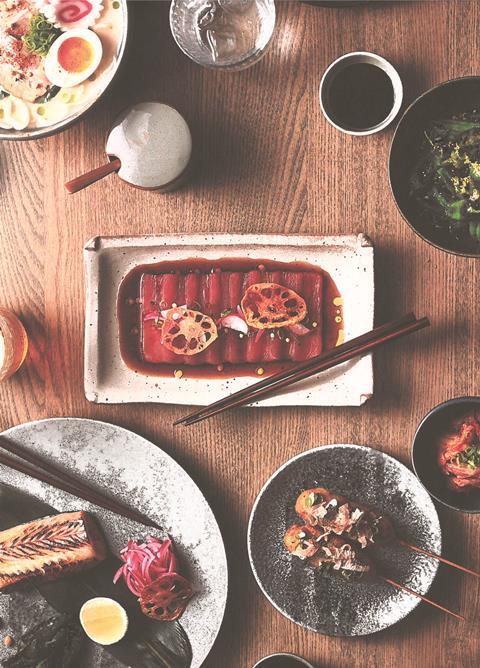 Pricewise, the menu is at a “slight premium” to a classic Yo!. “The average price point is higher, but it’s a more relaxed and leisurely experience. Most people who come will come back.”

His favourite dish is the miso black cod but more than anything he loves the variety. ”I really like this tapas type of dining, where you can eat as much or as little as you want. We are also going to introduce some specials, and some standard sashimi based on some of the feedback we have had. I am very confident as we get people to come and try the food, we will do well.”

If the Yo! Kitchen concept works he thinks it could open “20 or 30”. At the moment it’s “two, then pause. It’s so hard running a restaurant business at the moment because of all the cost pressures, that we are all aware of, so we are not betting the farm on opening 20 of these.”

When it comes to those pressures he is realistic but positive. “It’s easy to blame everyone else, but good businesses find opportunities in any circumstance. There are opportunities out there for all of us, but they are seized by those who are looking for it and have the energy to take it. Too many people are blaming circumstance and external factors for their own failings.”

Succeeding is dependent on many factors but the quality of location is absolutely vital, he adds. “When I arrived at Yo I could look very rationally at the P&L and say: ‘that’s not working because of the location’. Often restaurants fail because the manager isn’t good, so the team isn’t good, so the experience isn’t good. But nine times out of ten it’s the location.” 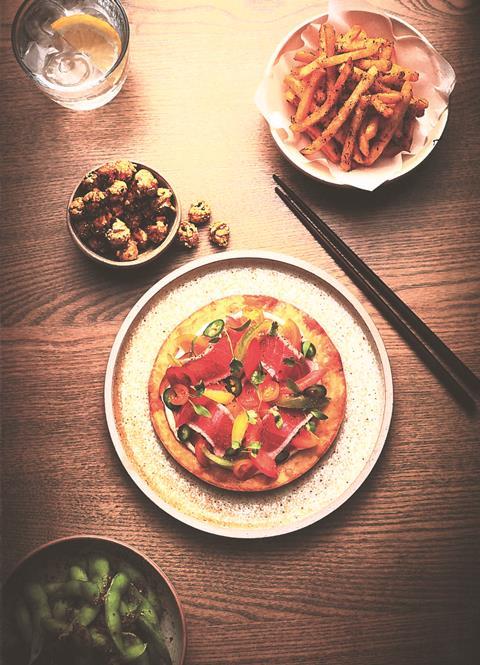 But even a great location is no guarantee of success in this climate. “It’s tough out there, there has been over supply and that’s why everyone is struggling. Wagamama is struggling compared to two years ago, Nando’s is opening less than they were before because they aren’t getting the returns they were two years ago. Anyone who tells you it’s not hard is lying. And some of the fantastic new brands that emerged five years ago have already stalled. It’s quite easy to have three profitable restaurants but I don’t think anyone will do what Pizza Express did and get to over 400, those days are gone. People are constantly looking for an alternative.”

Hence offering another alternative under the Yo! banner. And he’s philosophical about the inherent risks of innovation, saying “most innovation doesn’t work. At Pizza Express we created Reys, the food was beautiful, but it didn’t work. Return visits were way too low.”

But you have to try. “I worked for Archie Norman and Allan Leighton for ten years and they were big proponents of throwing half a dozen things at the wall, because that way there is more chance of something sticking than throwing just one. This is about investigating different concepts and ideas, developing them until you can execute them, then waiting to see what customers say.”

In short, you can’t innovate without taking risks. Or as the Japanese would say, ‘koketsu ni hairazunba koji o ezu’.

Say hello to a brand new Yo!
When Yo! Sushi arrived in the UK in 1997 it was everything casual dining wants to be in 2019. Colourful, fun, innovative and fresh, it also had entertainment on the side thanks to the novel kaiten conveyor belt that served up plates of food. Remarkably, the novelty hasn’t worn off, even after 22 years. Yo!, which dropped the ‘Sushi’ from its name in September to signal to the squeamish that it offered more than just raw fish, reported a UK sales hike of 5% to £88.9m in July.