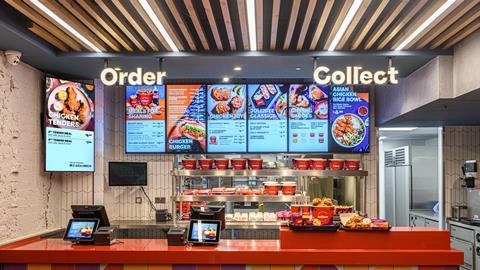 Jollibee: No reason we can’t beat KFC in Europe

Jollibee was treated as something of a curiosity when it landed in the UK in Earl’s Court.

Known as Asia’s answer to KFC, with its ‘jolly bee’ cartoon mascot, the Filipino brand launched very much in the mould of the big American fast-food names, a legacy of the stateside superpower’s enduring colonial influence in the East Asian archipelago.

Making a splash among the thriving Filipino community of Earl’s Court, who queued round the block to get a taste of home, Jollibee might have been written off as an opportunistic play to an immigrant demographic.

But that would only tell half the story. While the estimated 200,000 Filipinos resident in the UK have been a crucial part of seeking to establish Jollibee, taking the brand mainstream is the next important step on its journey.

Led by Adam Parkinson in the territory, as VP market head of Europe, he explains how the Jollibee Food Corporation’s strategy of reaching a wider UK consumer has been accelerated.

Speaking ahead of the launch of the brand’s flagship Leicester Square site, he says: “Our focus was to penetrate the Filipino communities first, then go to a mixed community, and then go into the mainstream.

“What we’ve done here is skip some steps. Obviously, respecting the Filipinos and making sure we look after them, because at the end of the day they pay the bills. But for us to grow and be competitive, we have to get into the mainstream.” 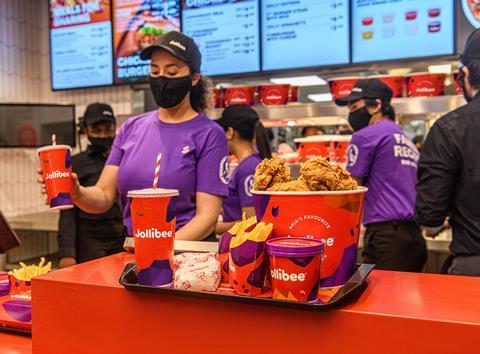 This is the key challenge - bridging the residual popularity and affection held for the brand among Filipinos, while building appeal in the wider population.

Leicester Square is the product of this endeavour, following two years’ worth of learning and repositioning.

Earl’s Court in 2018 was a carbon copy of the brand’s Asian-style quick service operating model, very much a fast-food diner in all red and white.

Having decided to target generation Z and younger millennials, the influential 18-30-year old ‘early adopters’, Parkinson and his marketing department realised more work was needed to elevate the environment.

In focus groups, food and service won plaudits, but the environment itself was found to be lacking, and too similar to rival fast-food brands.

The result, a revamped format in Leicester Square, leans into a fast-casual style environment, with a higher-quality fitout, and a tropical-influenced colour palette, in a nod to its Pacific roots.

“We wanted to try and create this environment where we could be considered a competitor of fast casual, in terms of the décor, in terms of the service, in terms of the product quality - but we keep that fast food price, because we know that we need those transactions to keep coming through the door.” 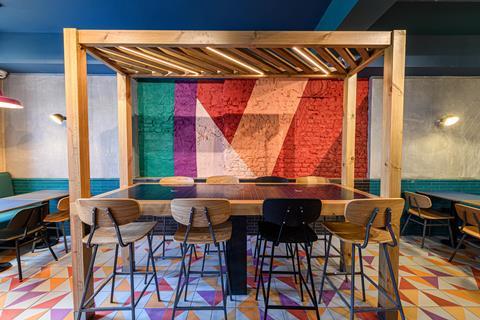 Elements of this new look have been tested in Liverpool and Leicester, with both attracting encouraging numbers of non-Filipino customers.

To build on this, influencers and Tik Tok campaigns have been launched to gain traction with this all-important younger audience.

Very much at the start of its journey in Europe, Jollibee has an ambitious opening pipeline ahead, and is investing nearly £1m a site.

Leicester Square alone, on the former Bella Italia site, is spread across three floors with 200 covers.

Elsewhere it will aim for high footfall prime locations, in all the major tier-one UK cities.

“We are pushing to get to 50 stores in the next three to five years,” Parkinson says. “This year we’ll end on 11 in the UK, two in Italy and we’ll enter Spain this year, with our first store in Madrid.

So far, the brand has sites secured in Edinburgh, Glasgow, Newcastle, Leeds, Liverpool, Nottingham and Leicester

Cardiff is under construction, while the search is on in Manchester and Birmingham.

“By the end of this year we will be pretty much covered in the UK, in terms of the major cities and next year we look at the tier two cities like Brighton.”

With strong ambitions and financial firepower behind them, the parent company takes a long-term view, and so has not been spooked by the pandemic.

“There is confidence from the owners to keep putting the money into the business,”, he says. “We see an opportunity to take advantage of the fact that rents are coming down, sites are becoming available.” 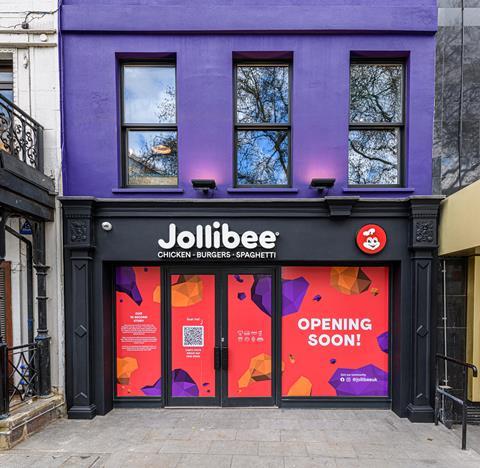 Alongside well-established rivals, Jollibee enters a competitive space, with the likes of Wingstop and Slim Chickens in the immediate vicinity of Leicester Square, and Popeyes another American fried chicken concept set enter the mix in the UK.

Having set itself apart with its new look, Parkinson cites Jollibee’s quirky food offering as a major point of difference.

Like a certain Colonel’s, its hand-breaded chicken batter is made to a secret trade recipe, though is crispier and less spicy then its Kentucky rival.

A signature of the brand is its spaghetti, with a super-sweet tomato sauce, chopped frankfurter sausage, and topped with melted cheese.

Going further down the tropical route, one chicken sandwich is served with pineapple and bacon.

Describing it as Western comfort food with a tropical twist, Parkinson cites the offering as a key differentiator.

“The heritage we have from the Philippines comes through in our flavours, but also in terms of our service, that’s what’s going to make us stand out from the crowd on the high street

“If you look at KFC, Popeye, Wingstop, they’re American and have a similar taste. Jollibee looks a bit more modern, a bit more funky, a bit more joyful.

“The menu is a bit different, more unique in flavour, whether it be sweet, Asian inspired, or tropical, we stand out versus the rest.”

In the long term, the ambition is to become the number one fried chicken brand in Europe, though Parkinson acknowledges this could take some time, due to a certain dominant player.

“KFC has a long history in Europe, and to be number one you have to have the store count.

“Our first goal is to fend off some of the smaller players that are coming in, to settle just underneath KFC. There should be no reason why we eventually can’t take the top spot in certain countries, if not in the whole of Europe. But it takes time, so we’re not jumping to that right now.” 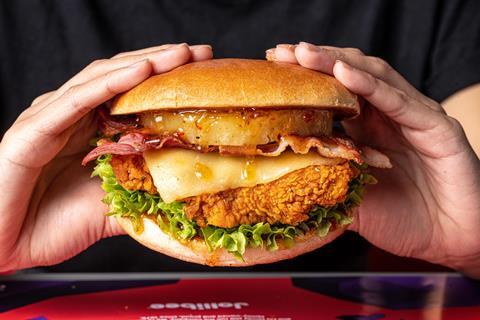 Jollibee: No reason we can’t beat KFC in Europe
Jollibee was treated as something of a curiosity when it landed in Earl’s Court. Known as Asia’s answer to KFC, with its ‘jolly bee’ cartoon mascot, the Filipino brand launched very much in the model of the big American fast-food names. Making a splash among the thriving Filipino community of Earl’s Court, who queued round the block to get a taste of home, Jollibee might have been written off as an opportunistic pitch to an immigrant demographic. But that would only tell half the story.