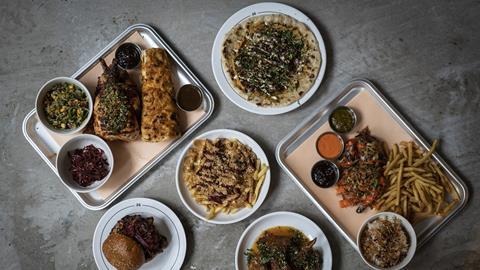 Tom Griffiths has a complex relationship with burgers. The Flank founder says it’s a universal truth that his peers love eating them but hate cooking them, and this dilemma has been a constant in his career.

Keen to avoid being typecast as a garden-variety patty slinger, when he first launched at Market Halls with partner Ben Rowland, Flank was positioned as restaurant-style offering. The wisdom at the time was that, with Bleecker Burger and Shake Shack nearby, there was no need for another burger concept in such close proximity, so Flank would concentrate on its nose-to-tail premium output.

Just over a year later, there’s been a definite repositioning towards faster, more accessible food at Flank and the wider Market Halls offering. The divisive burger is conspicuous by its presence, albeit one made with short rib, heart and plenty of fat minced through, making for a unusually rich example.

“I hated burgers for a very long time. They’re not very creative, they serve a purpose, and you do thousands of them a day.

“For a while I didn’t want to do it, but we’ve spent a good couple of months, developing a new burger, and it’s great.”

The resolution to do a burger – albeit a Flank-style one with a nose-to-tail composition – is indicative of the business’s more commercially minded approach that has come with maturity and experience.

Ultimately, the pair believe this will allow them to be more creative in the long run, by giving them the commercial strength to create their own restaurant.

“Your customers dictate what they want, and we very quickly realised that the bistro offering wasn’t going to work at Market Halls,” Rowland says. “We weren’t going to do the numbers we needed to, and that’s why we had to rethink and accept that these sorts of environments needed a faster and more accessible option.”

This spirit of compromise has allowed Flank to serve a big-selling burger alongside the more rootsy dumpling, which, though not a bestseller, has been a social media sensation from day one, doing its own heavy lifting on the marketing front.

While Flank has successfully flexed its offering, other foodie-focused concepts such as Bun Shop and Koya were early departures from the Victoria scheme after being unable to convert their Instagram kudos into lunchtime sales.

“The biggest thing for chefs is to start thinking commercially as a business, how to survive in this market, but also to stick to your ethos,” he says. “That doesn’t mean necessarily writing a menu full of jargon just for your ego. You’ve got to give customers what they want.”

The turnaround at Market Halls has led to an opportunity for a new concept, Good Birds, at the Market Halls’ latest West End opening. Just a few weeks old at the time of going to press, we meet days ahead of the opening of what is now the biggest food hall in the UK.

A singular concept, based around brined birds cooked over fire on a custom-made rotisserie, Good Birds came about almost in collaboration with Market Halls, with the food hall requiring an alternative to Flank’s more red-meat based Victoria offering.

“There is a conflict of interest at times with traders and what they do. So we were given the option of doing something that involved chicken,” Griffiths explains.

“We weren’t going to do fried chicken, that’s been done. We thought if we’re going to do chicken, lets go fully hard. Let’s look at brines, salt levels, the whole cooking process.”

The menu features quarter, half or whole birds, cooked low and slow and glazed over the fire. They come with own-made Asian-inspired sauces, such as smoked chilli sambal and peanut and cashew, while sides include ‘war fries’ – topped with a Dutch-style peanut cashew sauce, and a buttered naan.

While a slight shift from core Flank, Griffiths maintains it is in keeping with its founding philosophy.

“It doesn’t mean you need to go away from what you believe in. People might think because it’s chicken, it’s factory farmed and slapped on the grill. No, we spent time researching every single bit of salt that goes into the brine, making every single sauce on site.”

The open fire adds to a sense of theatre in what is no doubt a competitive trading environment.

“The drama’s there,” Rowland adds. “The bird’s dripping. The fire’s going. The spindle is turning. People eat with their eyes first, and that’s what’s going to pull them in.”

Adapting to the market Rowland explains that the genesis for Good Birds, and the evolution at Flank, can be traced back to Spitalfields Kitchens, its London debut.

While Flank originally made a name for itself with elaborate tasting menus majoring on offal, and collaborations with the likes of Douglas McMaster of Silo (like them, also previously Brighton-based), they had to adapt to a market where busy customers wanted to be fed quickly.

Most customers are happy to queue for 20 minutes but want their food within six minutes, and do not want to spend more than a tenner, he says.

“You can either throw your toys out the pram and go, ‘well, screw you, you either love me or you don’t’, or you can try to adapt.

“It’s not about selling out or watering down the product, it’s about learning your market, there’s nothing wrong with that. It’s evolution. It’s been a big learning curve in making it commercial as well as sticking to what we love doing.”

Having launched Good Birds in November, the next focus will be for Flank to open its own restaurant, which will enable them to go back to their more restaurant-y roots, and flex their “more refined cheffy muscles,” Rowland says.

“We’re both chefs, we love going wild in the kitchen, and working without the constraints we have put on ourselves for the street food-fast food market,” he says.

“By next summer, it’s important to establish there’s more to us, before it becomes too diluted into just the street food thing.

“We’re not your average street food slingers. We’re two chefs pouring their heart and soul into a dumpling or a fried chicken burger.”

Griffiths echoes that the best is yet to come.

“Anyone who’s eaten Flank food in the past 18 months will have no idea what to expect and it will hit them like a brick wall when they come to the restaurant,” he adds. “It will show people that there’s more to us.”

Flank - flexing chef muscle
Tom Griffiths has a complex relationship with burgers. The Flank founder says it’s a universal truth that his peers love eating them but hate cooking them, and this dilemma has been a constant in his career. Keen to avoid being typecast as a garden-variety patty slinger, when he first launched at Market Halls with partner Ben Rowland, Flank was positioned as restaurant-style offering. The wisdom at the time was that, with Bleecker Burger and Shake Shack nearby, there was no need for another burger concept in such close proximity, so Flank would concentrate on its nose-to-tail premium output.