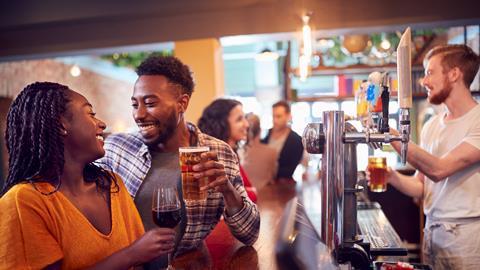 Time at the bar?

The scrum at the bar is as much a British rite of passage for the cash-waving customer as it is for the freshly trained recruit charged with marshalling a four-deep crowd.

Yet the concept has been rendered obsolete by the pandemic, a distant memory of how things used to be done.

With restrictions on ordering at the bar due to be eased later this month, how effective has table service and mobile ordering been – and how much this new model is here to stay?

For Jobe Ferguson, who runs a number of bars in Manchester and the North East, including Dog Bowl, Liars Club and Crazy Pedro’s, table service has been a win-win for the business and customers.

“Our sales have been terrific,” he says. “For outside areas, I think it’s just easier for people. They don’t have to get up, trek inside and it cuts out the bar element. It’s better for the customer.”

Ferguson’s bars use two apps, Goodeats and Peazi, and his views are backed up by research. GO Technology found that 40% of consumers said smartphone apps improved their hospitality experience, while 67% of 25 to 34-year-olds say they would buy more drinks through their device.

“I think when someone orders a beer then decides to perhaps order a tequila – they’ll normally just get the house choice. But with the app they’ll see something costs more and order that instead.”

The apps don’t just inherently upsell but can promote volume buying too. “People will often double up and get two rounds. Or get savvy and start ordering halfway down their beer – rather than then standing up at a bar you can line it up so you’ve got a fresh one,” he says.

This would seem to suit the higher-spending elements of pub culture. Ferguson agrees and he’s not alone.

Wetherspoon’s first introduced its table service app in March 2017. By October of that year it was credited with driving share prices up 44p to £12.77.

“Penetration of its mobile app has begun to drive exceptional [comparable sales] growth,” Berenberg analysts said at the time.

He confirms the pubco’s venues will return to bar service once the final stage of restrictions lift – though table service will remain an important part of its proposition.

“We are looking forward to serving customers at the bar, but still expect table service to be an important feature of our pubs for now and the future,” he adds. 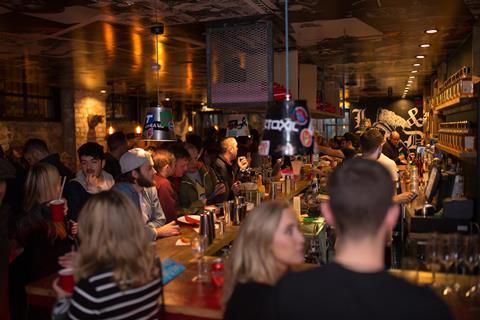 Not everyone is as effusive. Others in the trade are more sceptical about the sustainability of table service, particularly among smaller more traditional pubs.

Emma McClarkin, who represents some 20,000 venues at the British Beer and Pub Association (BBPA), warns a permanent shift in pub operating models could damage the industry at a particular vulnerable moment.

“From a consumer perspective, some have enjoyed table service,” she says. “But many businesses say to me it’s unsustainable.”

She highlights two key drawbacks – labour cost and intensity. “For smaller pubs that might be running as a couple-only operation, employing one extra member of staff is a huge thing for them to do.” There is also the physical effort, McClarkin citing the example of one member of staff who walked 35,000 steps in a single shift. “The teams are visibly tired – a certain amount of stamina needs to return after being away on furlough, but it is exhausting.”

An operation’s model and scale will dictate whether it can absorb the downsides of table service. “If you’re a pub that leads with food then maybe it’s an easier thing to retain, or if you are a larger venue that has the space,” McClarkin says. “But many venues will want that space maximised with a return to vertical drinking. If you can turn over more drinks and covers because of bar service, then it will likely return to that. Profitability will have to take precedence.”

For Jobe Ferguson’s city centre venues, the extra costs of staffing are balanced out by the extra spend from seated customers.

Both he and McClarkin suggest the increased tips reported for table service staff could also help tempt new workers into a hospitality industry that has, according to the Office for National Statistics, lost 335,000 employees since the pandemic began.

Ferguson also points to another bottom-line-boon at his Bay Horse Tavern venue in Manchester’s North Quarter. “We were shoehorned in to do outdoor seating for a couple months to help us with the Covid situation. Now the local council have allowed us to keep it permanently. We’ve increased capacity by 33%, which is a huge bonus.” 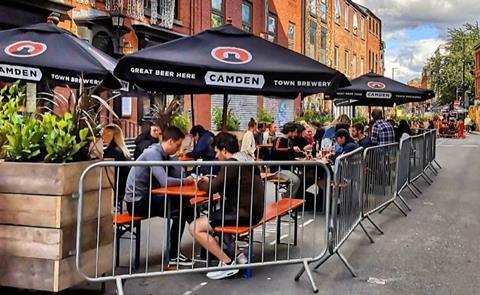 So what lasting impact are we likely to see for operators and landlords? Thom Hetherington, CEO of exhibition and awards platform Northern Restaurant & Bar (NRB), says there may be a mismatch in operator-consumer preferences.

“There could be a slightly awkward situation where customers have enjoyed being able to order from their tables – no more scrums at the bar and jostling elbows – but operators have struggled to foot the additional staffing bill and may want to revert to a more sustainable model,” he says.

He points to the bar, dining and culture location Escape To Freight Island, at Manchester’s Mayfield Depot, also home to Sacha Lord’s The Warehouse Project, as a successful example of a site that was using table service via an app pre-Covid-19. 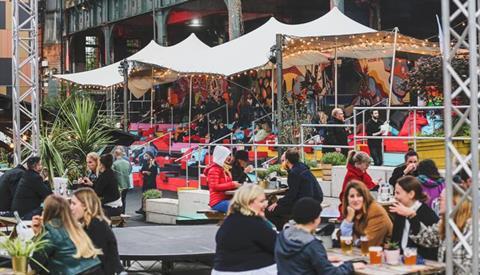 “Will there be an increasing prevalence of table service-based business models? I suspect there will be more to come,” Hetherington says.

There are also implications for design. Steve Wells is a director at Astounding Interiors, which designs pubs, bars and gastropubs across the UK. He says UK operators are evolving their offering to meet the expectations of a post-Covid-19 customer. “More restaurants will have less fixed seats in order to have more flexibility for table arrangement,” he says. “We have a lot of new projects and enquiries coming in and the venues that survived the lockdown are expanding their businesses.”

Jobe Ferguson predicts that, with uncertainty still rife around Covid-19, and the possibility of future restrictions looming large for the medium term, bigger is most definitely safer. “Small, tightly packed venues will be challenging, because if lockdown happens again you can’t operate. Moving forward, bigger capacity venues are definitely on the radar.”

What does this mean then, for the convivial atmosphere of the Great British watering hole?

“That element is lessened, particularly for people that pop in on their own,” Emma McClarkin says. “Obviously you want people to enjoy themselves, but then you have one person taking up a whole table which is difficult from a cost perspective.” 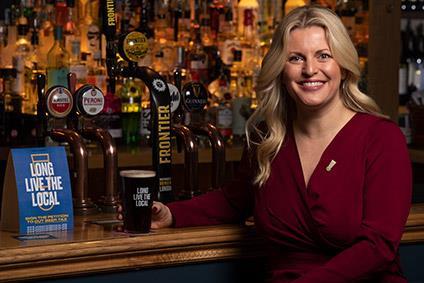 Overall, she suggests there could be a move towards a more European-style operating model – whilst still retaining British cultural norms. “I think people will think of us more as a cafe society with continental-style terraces, as people consider how they use outdoor spaces with some kind of table service in order to fully utilise them,” she adds.

“But, ultimately, people want to get back to the pub being the pub.”

Time at the bar?
The scrum at the bar is as much a British rite of passage for the cash-waving customer as it is for the freshly trained recruit charged with marshalling a four-deep crowd. Yet the concept has been rendered obsolete by the pandemic, a distant memory of how things used to be done. With restrictions on ordering at the bar due to be eased later this month, how effective has table service and mobile ordering been – and how much this new model is here to stay?