Kerb appeal: what the future holds for the street food sector

The pandemic has devastated the street food sector, but with the end of lockdown in sight, Kerb duo Petra Barran and Simon Mitchell believe there’s plenty of reason for optimism.

“Something big is going to happen,” says Petra Barran, cryptically. The founder of business incubator and food market operator Kerb is deliberating about what the future holds for the country’s previously burgeoning street food sector; a corner of the eating out market that Barran herself has been instrumental in helping to grow over the past decade.

Back in late 2019, it felt as if street food was moving closer and closer to saturation point. Driven by developers looking to create public dining spaces where weary office workers could find solace both at lunchtime and the end of the day, the rise of the food market movement, and the growth of food halls both in capital and beyond, brought huge opportunities for chefs and operators to try out new concepts and ideas with relatively little outlay or risk.

Barely a week would go by without someone announcing they were planning to open a new food hall or food market somewhere in the UK. The model was seen as a win-win – lower rents and negligible fit-out costs made it accessible to a broad range of traders, while the notion of housing numerous concepts under one roof gave consumers much greater choice and encouraged them to come back time and again.

All of that was put on hold, though, when the pandemic hit. In a world of social distancing, communal dining fell suddenly out of favour (as well as being against Government guidelines) with people, threatening to challenge the very existence of the food hall.

Market Halls, another major player in the food hall space, announced in July last year that it wouldn’t reopen any of its three London sites while social contact rules remained in place, simply saying it would reopen ‘when it can’. As Barran notes, Kerb’s own food hall in London’s Seven Dials was the only major indoor food market, in the capital at least, to reopen its doors at all last year.

The future of food halls

Post pandemic there is hope that things will return to some sort of normality for the world of hospitality, but lingering concerns of crowded spaces and with lunchtime footfall anticipated to be lower than pre-Covid levels as more offices adopt hybrid working models, operators of indoor food markets could have to wait longer than others to feel the benefits.

Longer term, however, there is confidence that the appetite for food halls among both consumers and developers will return, if not surpass, pre-2020 levels. 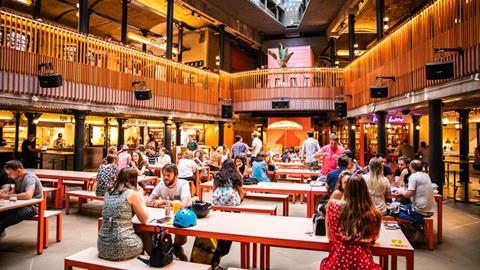 “You’re going to see more food hall concepts than ever pop up in the months to come,” says Simon Mitchell, Kerb’s chief executive. “It’s what developers are looking for. The impact of the pandemic mean high streets are going to be full of huge, empty retail sites, and opening a food hall will be seen as an easy way of repurposing those spaces. We’ve literally been offered every Debenhams site in the country in the last three months.”

A report by real estate consultancy P-Three, recently published by The Guardian, certainly supports Mitchell’s theory. With big shifts in consumer spending and attitudes caused by the Coronavirus pandemic – including a newfound appreciation of local community – there is now a clamour from investors to build community-driven food halls in old retail sites, according to the research. It’s estimated that even as many as 120 of them could open across the UK.

Then there’s the evidence on the ground. In London, artisanal food market operator Mercato Metropolitano recently announced a £35m plan for global expansion that’ll see the group open three new sites in the capital this year alone, with further markets planned for secondary cities around the UK in the coming years.

The first, planned for Canary Wharf, will be in the guise of its new smaller ’neighbourhood’ concept that seems to fit with the growth in neighbourhood dining as a result of the pandemic with people choosing to stay near their homes rather than venture further into central London.

“There’s definitely going to be a bit of a landgrab, and you might see an almost fast-casual explosion of food halls,” continues Mitchell. “In the next year to 18 months, I suspect we could see as many as 10 new food halls pop up in London alone. The challenge for each of them will be working out how they can stand out from the crowd.”

Barran agrees that a swell in food hall openings is inevitable. “Developers see food halls as the golden egg solution,” she says. “It’s a maturation of what we we’ve seen in the past – that appetite to have a food market, which can anchor a space and make it cool and accessible. There’s going to be a real desire to get food halls into these empty spaces to help drive footfall and traffic back to the high street as the economy recovers. Whether they’re going to be interesting enough or able to offer the necessary amount of authenticity to bring customers back again and again is another question.”

Part of the answer to that question will lie in originality and ingenuity of the street food traders that will populate these new markets. Much has been said about how the pandemic has exposed the fallibility of some of the bigger restaurant groups, and opened the door for smaller, independent businesses to embrace a more entrepreneurial spirit.

Barran, who recently ran an incubator programme called Kerb classroom for prospective street food operators, agrees that there will be plenty of creative innovation – not only from established traders, but new ones too. She cites a recent figure told to her by the London Food Board that registrations of new food businesses were up 200% in 2020. 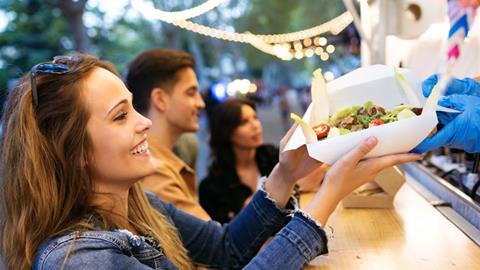 “Street food is an eye-to-eye business that people want to be a part of. Entrepreneurs who have wanted to make that leap but never felt like it was the right time are now picking up their passion and setting up these businesses. And then there are chefs and restaurateurs that have been in the industry for years, who have fallen on hard times, are looking for new ways to trade, and have turned to the street food model because it’s very accessible.”

Kerb was founded by Barran back in 2010, and came at a point when, off the back of the 2008 financial crisis, there was a huge influx of people wanting to start a street food business. “This is so different, though” she adds. “The businesses that were coming out then felt new and fresh because the whole concept did. The informalisation of our dining was very new to us, as a country, but that’s all happened now. There’s going to be an appetite for new types of businesses, but the spaces will be the same.”

Despite their optimism for the future, both Barran and Mitchell are in no doubt that the past year has been devastating for the street food sector. “It’s been so tough for the traders,” says Mitchell. “They are, as a group, part of the forgotten three million. They’re often self-employed and don’t pay themselves on the payroll, so they’ve missed out on being able to access furlough; and as street food traders they don’t have business rates, so they’ve haven’t been able to claim any grant support. We’ve lost a lot a fair amount of Kerb members over the last 12 months, and it’s been heart breaking.”

Unable to trade or access support, many street food operators have battled to keep their brand and business alive during the pandemic. But as things open up in the coming months, Mitchell envisages huge opportunities for those that have managed to weather the storm, as the restructuring of the casual dining market brings changes to commercial lettings landscape.

“The reason so many people come to street food is because it’s accessible, but what you will see now is bricks and mortar also becoming more of an attainable goal for small businesses. We’ve been in this horrible cycle for a decade now where fast-casual chains, backed by venture capital money, have exploded and been willing to pay ridiculous rents, which have forced the little businesses out.

“We’re seeing the appetite for that market begin to wane now, though. The public are more engaged with supporting the independent traders; they care more about what they buy and where they’re getting it from. The fast-casual bubble has burst. Big chains are using CVAs to surrender loads of their sites; it’s a huge shift that could make bricks and mortar much more accessible for the smaller operators.

“Councils will be thinking of ways to help enliven their high street offering and a great way to do that is with hospitality businesses and new, interesting and local food concepts that have a story. There is a world coming when securing a bricks and mortar site is actually achievable for street food traders.”

Hopes for the future

For Kerb, the past year has been one of ups and downs. Being able to reopen Seven Dials was clearly a highlight. Having adapted the site and embraced technology to ensure a safe space for both guests and traders, the pair were pleasantly surprised by how busy it was. But the tumultuary of operating under increasingly draconian restrictions, coupled with sudden lockdown announcements, has hit the group financially.

“It was really exciting and great to be open, but we did lose an absolute fortune,” says Mitchell. “In the downtime, though, we’ve really been able hone our operation with a focus on the hospitality – making sure Seven Dials is representative of the pillars of our business. We’ve made sure that it will remain true to our roots with independent food businesses and independent drink brands, and really focused on the operation to ensure consumer will continue to get the best experience whether we open with or without restrictions.”

In response to the pandemic, Kerb has mixed up its business model and split it into three areas of focus: food halls; event catering; and social enterprise, which will oversee the group’s outdoor lunch markets and incubator schemes.

While the growth in food halls both in London and beyond is seen as an inevitability, Kerb’s own expansion will more considered. “We don’t have any massive plans on growth,” says Mitchell. “Our focus now is on creating opportunities for traders and entrepreneurs via street food.

“Eventually we will look to grow out food hall business, but that has to happen organically. We want to use iconic, city centre locations. Seven Dials is fantastic as the building [a 19th-century Thomas Neal’s Warehouse] has so much history; opening in a shopping centre isn’t for us. It’ll be hard to just find spots like that, but we’re going to try. And hopefully we’ll get to do something else in the next couple of years.”

“We’ve had such a kneecapping in the last 12 months,” adds Barran. “But we can finally see the milk and honey on the other side. There’re loads of opportunities for us as we’ve diversified, and it gives us a lot of hope.”

Kerb appeal: what the future holds for the street food sector
“Something big is going to happen,” says Petra Barran, cryptically. The founder of business incubator and food market operator Kerb is deliberating about what the future holds for the country’s previously burgeoning street food sector; a corner of the eating out market that Barran herself has been instrumental in helping to grow over the past decade.